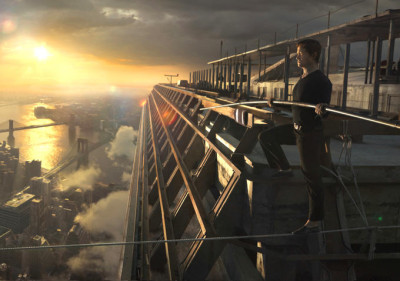 The film opens, bizarrely enough, with Petit (Joseph Gordon-Levitt) addressing us directly, from atop the Statue of Liberty. It seems an odd way to begin, but both his being on the statue and speaking English with a heavy French accent (the accent is right; Gordon-Levitt speaks Parisian French so fluently, he fooled Parisians on set) can be accounted for if you pay attention to what he has to say after completing what he refers to as his artistic coup.

Petit takes through his life – from discovering wire walking when he snuck into a circus as a kid – the head of said circus, Papa Rudy (Ben Kingsley) later becomes his mentor; to his devotion to his art leading to his being thrown out of his parents’ home; to meeting a beautiful street singer named Annie (Charlotte Le Bon, The Hundred-Foot Journey); to his first illegal act of artistry – wire walking between the towers of Paris’ Notre Dame cathedral.

It’s Annie who points out a news story about the magnificent twin towers being constructed in the United States (it’s a story in the same paper in which his Notre Dame walk is the front page news story). He is immediately smitten – the twin towers call out to him!

Over the next several months, Petit practices and acquires both accomplices (setting up will require a team) and equipment. Then they all fly to America, where he calmly details his equipment to a slightly less bored than usual customs officer. When asked what it’s for, Petit calmly tells him, ‘I’m going to hang a wire between the twin towers and walk it.’ The response is pretty much, ‘Right. Good luck with that.’ But he’s waved through.

In New York City, a chance encounter with Barry Greenhouse (Steve Valentine) proves propitious – Barry was in Paris when Petit walked Notre Dame; he’s got an office in one of the towers, and he’s willing to help! A French expatriate cabbie named Jean-Pierre (James Badge Dale) – ‘call me J.P’ also comes aboard – and provides two more helpers.

Throughout this portion of The Walk, Zemeckis goes light on the 3D, ramping it up only in moments when there is actual wire walking going on. It’s enough to foreshadow the possibly vertiginous moments later.

The second act of the film finds Petit and his allies casing the twin towers, making sure that they know everything about the tower that’s still under construction – the workers’ schedules, which areas give access to staircases, which elevators are best to use… Essentially, The Walk becomes a heist flick in the middle – and like all good heist flicks, everything goes like clockwork until it doesn’t.

Between giving us a real feel for Paris and New York, Zemeckis gives us enough character development that we care about the main crew: Petit, Annie, photographer Jean Louis (Clement Sibony) and math guy (and sufferers of extreme fear of heights) Jeff (Cesar Domboy) – and even New York addition JP.

If Zemeckis makes Petit more of a charming rogue than an arrogant ass (as Man on Wire shows him to be), it’s to make us a little more comfortable with the man who is about to hang a wire between two buildings that reach skyward far enough that clouds occasionally pass between them, and walk on it.

And once The Walk enters the final act – the actual getting into the tower, setting up and Petit’s mind-boggling walk, Zemeckis unleashes the full effect of the film’s 3D. The camera glides around the towers, swoops down to street level and back. In the middle of it all is Petit, walking the wire; saluting the wire, the towers and the crowd; calmly laying out flat on the wire…

Even though Petit’s walk is a matter of historical fact – and the subject of an amazing documentary – Zemeckis makes his audience feel the weight of what Petit did so well that our hearts flutter with terror and we lean forward in our seats (maybe some of us even watch from between our barely parted fingers) – the tension heightened even more by the knowledge that the building would soon be completed and any such attempt would become impossible.

Sometimes a flawed movie provides such an unexpected experience that it’s as though those flaws never were. The Walk is flawed – it tries to be three different kinds of movie (charming biography, heist flick, epic achievement story) and not every moment works completely, but it doesn’t really matter. The whole experience of The Walk is greater than the sum of its parts.