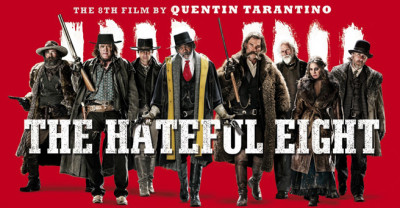 After spending his last few outings exploring “bigger” and more “complex” films Tarantino returns to his Reservoir Dogs roots with The Hateful Eight. All the bluster about 70 mm vs digital aside, this is a very intimate film that is just a few steps above a one act/room play. I don’t say this as a criticism, it is what it is. Robert Richardson’s  cinematography is at times breathtaking, especially the snow covered outdoor landscapes. I just can’t tell if that’s because of the 70 mm print or not. This is Tarantino, so the film is all about dialogue and character and not really breathtaking cinematography, so other than Tarantino’s firm belief in preserving 70 mm, I’m not clear why he’s pushing it for this particular film.

I’m thoroughly convinced that Tarantino is in love with Westerns because he can use the N word in every sentence without getting criticized for it. His snappy writing feels a tad out of place here, but it’s always worth a visit to Tarantino’s world. The Hateful Eight feels slow and takes a long time to build. It was my issue with Inglorious Basterds, that opening 30-minute sequence in the farm felt like it lasted forever. This movie is a 3-hour version of that – just a bunch of people stuck in a Tavern together due to the raging blizzard outside. 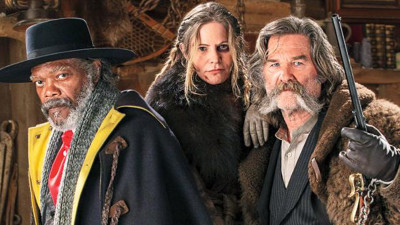 Tarantino takes great pains in showing us how all the 8 characters in the film come together and end up in this spot. My primary issue with the movie was the coincidences, it got to be a bit much and felt a bit amateurish, the way characters where introduced and everyone just conveniently either knew or heard of each other. It’s like “Hey, who, you are Killer Bill, I heard of you!” Or, “My god, we had dinner together 7 months ago!”

Bounty hunter John Ruth (Kurt Russell) is transporting the dangerous prisoner Daisy Domergue (Jennifer Jason Leigh) when he encounters fellow bounty hunter Major Marquis Warren (Samuel L. Jackson) who lost his horse. With the blizzard barreling at them, Ruth agrees to let him tag along. Along the way they pick up another passenger Sheriff Chris Mannix (Walton Goggins). They are surprised when there are others already at their destination. Ruth and Warren are convinced that 1 or 2 of the patrons; Mexican Bob (Demián Bichir), Oswaldo Mobray (Tim Roth), Joe Gage (Michael Madsen) or O.B Jackson (James Parks) is there to break out Domergue.

The film becomes a mystery as to whether one of the patrons really is there to break out Domergue or when Jackson is going to get to go crazy on the old vicious Civil War General, General Sandy Smithers (Bruce Dern).  The inevitable violence in the film is teased and built up to a fever pitch so that when it boils over it feels earned and not gratuitous.

When I say this is a more self assured Reservoir Dogs, that’s a good thing. This movie is by an auteur who is in full command of his craft and has a clear, uncompromising vision of what he wants.