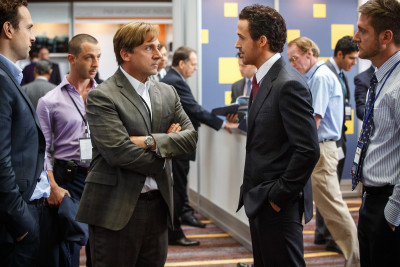 When Wall Street collapsed in 2007, it was because something that had always been stable – mortgage bonds – had been undermined by sub-prime loans and their repackaging in ingenious ways to mislead everyone into thinking that nothing had changed while everything was changing.

The Big Short is a farcical look at how a handful of cynics actually looked into the numbers of what was going on and determined that the whole was a house of cards that would collapse – and then they bet on that collapse. In short, they got rich while millions lost everything.

What Adam McKay and co-writer Charles Randolph have done is put the stupidity of the situation under a bright, harsh light. Then they’ve persuaded us to cheer on the handful of cynics right up to the moment that they realize what the consequences of their success will be – and then carry on to the resolution of the story, where we realize that it’s possible for the same thing to happen again. 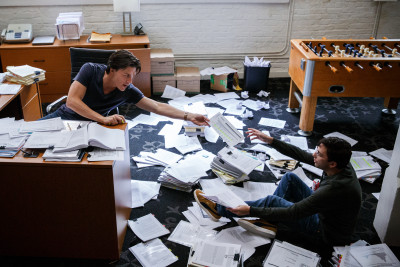 What makes the story so incredible is that the cynics who bet against the American economy never really crossed paths – not knowingly, at any rate.

The Big Short is narrated by Jarred Vennett (Ryan Gosling), who addresses the audience directly from the beginning, explaining what happened around bits of story involving the others. When he comes to a term with which we might be unfamiliar, like C.O.D.s, he has it explained in a plain, simple way (as in ‘Here’s Margot Robbie in a bubble bath to explain’). Each explanation is simultaneously hilarious and sobering.

The cynics are: Dr. Michael Burry (Christian Bale), Mark Baum (Steve Carell), Charlie Gellar (John Magaro) and Jamie Shipley (Finn Wittrock). Vennett comes into the story when he calls a wrong number and almost literally stumbles into the proceedings – his working for one of the banks involved doesn’t test his loyalty for a second: he’s in it to make money. Period.

There are lots of details that play into the film – character stuff (Baum is a shouty guy who hates hypocrisy more than anything; Burry has a glass eye and is socially awkward; Vennett is slicker than Brylcreem, etc.), the machinations that let these outsiders who have actually looked at the numbers pull off the deals that they do; the moments when some of them realize the real cost of their success – that could remarked upon, or at least hinted at, but the film is so densely packed with them that it’s best to let you see them without doing so.

What matters is that Adam McKay has graduated from light satire and goofy comedy to brilliance on a whole ‘nother level – and that The big Short is a revelation both in terms of what he can do and in terms of what happened in the 2007 crash.

You will come out of The Big Short entertained – and in all probability, angry. That’s a good thing.