Dr. Bennett C. Omalu is the Nigerian-American coroner who identified the brain damage that was the cause of mental health issues for ex-NFL players. The story is, as they used to say, ‘ripped from the headlines’ – and given that the NFL has just backed out of a concussion study at a Boston University, its release could not have been timelier.

Concussion opens as former Pittsburgh Steller ‘Iron’ Mike Webster (David Morse) gives his acceptance speech at his induction into the NFL Hall of Fame. Not long afterward, he’s reduced to living in his truck and begging former team doctor Julian Bailes (Alec Baldwin) for help, though there’s really nothing Bailes can do.

When Webster commits suicide, his body winds up on the autopsy table of Omalu (Will Smith), who can’t find anything to indicate what could have driven Webster to die at such a young age. Instead of just writing up what he’s seen in his examination, he orders a full panel of tests on Webster’s brain – and pays for them himself.

Eventually, he gains Bailes’ support – in one of those real-life twists that seem unlikely, he’s already gotten the support of his boss, Cyril Wecht (Albert Brooks), who supports him even though the NFL (‘They own a day of the week. The Church used to own it, now they do’) isn’t going to like it. 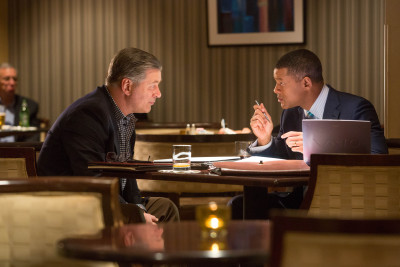 Omalu, a nice Catholic boy, attends church – where he meets Prema Mutiso (Gugu Mbatha-Raw) when the priest, Father D’Amico, asks him to take her in because he knows she’ll ‘be safe with you.’ Having her around gives him something he never saw before – where his discovery leads him directly to the dark side of the game, she sees the beauty and grace it can display, likening it to Shakespeare.

As more Steelers die via suicide, the evidence mounts until Omalu is asked to speak to the league’s powers, Commissioner Roger Goodell (played unctiously by Luke Wilson) – but when he and Bailes arrive, he learns that they don’t want him in the room. Bailes must give the presentation. It was just a set up to discredit the findings.

Then there are the threats, harassment by the FBI and the indicting of Wecht on bogus charges – eventually leading to enough evidence piling up that Goodell can no longer dance around yes or no questions before a Congressional hearing. And Omalu and Prema get married (there has to be some purely good news, doesn’t there?).

Concussion was the victim of a nasty hit piece in the New York Times that said it had been altered because of pressure from the NFL. This before anyone outside the production team had seen a frame of it. As I watched the film unfold, I could find no evidence of it going easy on anyone – let alone the NFL. 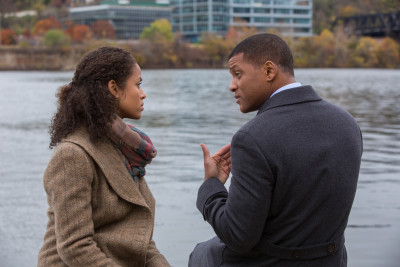 Gugu Mbatha-Raw and Will Smith star in Columbia Pictures’ “Concussion.”

The film is getting a lot of notice because of its topicality and its treatment of ‘America’s game’ but it sits in a position of truth, whatever else might be wrong (or right) with it.

As a statement it carries a lot of impact, but as a film, it seems more like a TV-movie of the week with more gloss (and a far more expensive cast).

It’s not that it’s poorly made – it’s as well constructed as any film this year – but rather that it gives only one really well developed character and relies on performance to give depth to less roles.

On that level, at least, it’s pretty great. Will Smith has never been better (not even as Muhammed Ali) and Baldwin and Brooks bring far more to their roles than was on the page. M’Batha-Raw gives Prema a delicate toughness and strength of character that lets us see why Omalu would want to marry her – and how, through her eyes, he can come to see football as something more than just a killing field.

Overall writer/director Peter Landesman seems more focused on making a statement than telling a story or giving us fully realized characters. That Concussion is as good as it is, is as much because of a cast that brings more to their roles than the words on the page as it is because of the timeliness of the statement it’s making.