So far, I’m pretty disappointed in this season of The 100 and considering the show is about to take a month long break after next week’s episode they have a lot of ground (pun intended) to make up. What this season is missing is a sense of urgency and coherence. Season 1 and 2 were special because it was a show that swung for the fences and 9 times out of 10 hit it out of the park. It was bold, visionary and shocking but not for the sake of being “shocking.” Each season had a common goal that everyone was working towards. There was never a cliche’d last minute save, the stakes were constantly ramped up and raised the bar on how good tv fantasy/sci-fi can be.

This season feels kind of lazy, disjointed, with no common thread to tie it all together and most of all timid, like they don’t want to go for the jugular. The worst thing I can say is it’s become a cliche’d science fiction show. The City of Light storyline is basically the Matrix prequel that nobody asked for. We’re on the 7th episode and have yet to see a major death and the Arkers and City of Light Storyline this season is really dragging things down.

With that said, I remain ever hopeful that it’ll all come together in the end. With all of this said, let’s get on with the recap. Remember, I hate COL and will be fastforwarding over as much of that storyline (and anything involving Jasper) as I can – until it eventually converges and ruins the rest of the show.

Episode 7 is titled Thirteen. People aren’t happy with Lexa’s decision to spare the Arkadians, we found out that Titus may not be as loyal as we think, and once again poor Murphy is being tortured again. Turns out the chip Murphy had contained the symbol of the commander. Titus is trying to find out how Murphy got his hands on the “sacred symbol.” Murphy tells Titus about Allie.

We flashback to the beginning where we see Allie’s creation. Correct me if I’m wrong, but I believe this is the first flashback of the season and now that I think about it I don’t think we had any last season. But this flashback feels jarring. Hey, it’s Black Bauer (Chris)! I always enjoy seeing him pop up in types of shows. He must get tired of playing military background type characters. Anyway, Rebecca the scientist who invented Allie is working on another AI. Looks like they were working on a competing program/virus to stop Allie (Allie 2.0) but they were too late. Allie launched the warheads and destroyed the world.

Not sure what the point of all of this is yet, we already know Allie was responsible for destroying the world so this flashback feels like useless exposition. Granted it’s pre-credit exposition, but still. 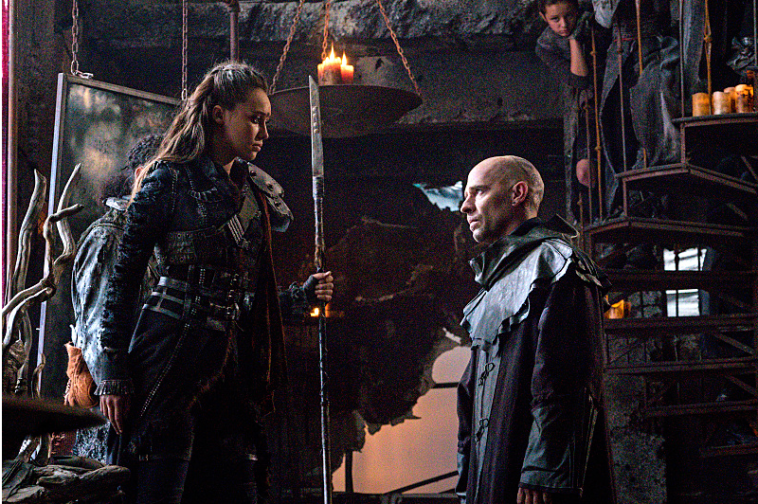 After the credits we get my favorite Lexa. The grounders are celebrating ascension day, which honors former Hedas. The festivities are interrupted when Semet (the leader of the Village the Arkers attacked last week) drags Octavia into the throne room to let everyone know what happened. Seems Titus failed to inform Lexa and wanted her to be shocked and publicly shamed by what happened. Semet begs Lexa to grant them justice and kill Octavia. Indra is amongst the group in disguise. Lexa is upset at Titus for bringing this news to her on their Holiday. He rightly tells her it’s the Arkadians fault and don’t blame the messenger and that this is proof that Blood Must Not Have Blood has failed.

Of course Clarke is once again being a self righteous twit. She tells Lexa that Titus is right but still goes on to convince Lexa to not attack saying not everyone agrees with Pike and to give them a chance to rise up and overthrow him. How many more people have to die before Clarke wakes the fuck up? Worse is Lexa agreeing.  I’m really hating Clarke this season and she was my favorite character on TV last year. She is clearly using Lexa’s feelings for her to constantly get what she wants.

So she decides to send the army to contain Arkadia and to prevent them from taking more land. They set a 5 mile radius around the camp and Lexa issues a kill order for any Arkadian that crosses the border. Sounds pretty reasonable to me and I’m sure it’s all going to end well. Because you know, the last time they sent a peaceful force to Arkadian went splendidly. But of course saint Octavia is outraged. She confronts Clarke about it and goes on and on about how unreasonable Lexa is being and once again Lexa has betrayed the Arkers and she can’t believe Clarke is defending her.

Wait, WHAT? I MEAN WHAT? After everything Octavia has witnessed the Arkers do in the last few episodes, she thinks Lexa is betraying THEM again? Octavia has turned into a unlikable, self righteous, hypocritical bitch this season. So it’s ok for the Arkadians to kill as many grounders as they want and Lexa is not allowed to defend her people and lands? Octavia is supposed to be the one Arker who actually understands and wants to be a grounder, but clearly she doesn’t.

Murphy somehow gets out of his chains and sees the Polaris pod. We get another flashback. Rebecca is aboard the Polaris space station on the day the 13 stations are to be joined (wait, I just got it, 13 stations, 13 clans, and the name of the episode is 13, ah… ). She’s working on another A.I. program – Allie 2 that will work with Humanity. This is where I say what the hell? I mean really WHAT.THE.HELL? The woman designs the A.I. program that destroyed the entire world and now she wants to create ANOTHER one? This is why I hate scientists, a bunch of arrogant, know it alls who will be the death of us all.

We see her inject herself with a black substance, which she then places a lot of vials of into a case.  It’s pretty blatant where this is all heading. Lexa and the Nightbloods will be descendants of the people injected with Allie 2.

Clarke wonders how Lexa can be so calm after someone tried to kill her. Octavia goes to see Indra who apparently has completely given up on herself. Octavia tells Indra that she can’t March against her own people.

We finally get full on, non-ambiguous Clexa!!!  Clarke finally commits and you know what that means, Lexa is doomed, just a matter of time now. But I loved the seeing them in bed together, happy, while Lexa tells Clarke to stop talking about plans and just enjoy the moment. The smile on Lexa’s face was beautiful and heartbreaking because you just know something’s going to happen to her.

Titus for some reason that I couldn’t fathom decides it’s time to kill Clarke. That Blood must have blood so he sets up Murphy to be the fall guy. He tells her that Lexa will believe Murphy killed her because he’s using a gun to do it. He and Clarke get into a fight and while he’s shooting at Clarke, Lexa walks in and takes one in the chest and dies. I had a feeling she was going to die, but to do it is in this lame way and for no reason and in the same episode they finally commit? What a rip-off to fans! Before she dies she made Titus promise to protect Clarke and the next Commander with his life. You know, because he did such a bang up job this time. I can’t tell you how much this scene pissed me off.

I guess we’re supposed to be shocked that Titus pulled out the Allie 2.0 chip from the back of Lexa’s neck. As if it wasn’t clear enough that Allie 2.0 was helping all the commanders, the episode ends with Rebecca arriving on earth, able to breath the Air and discovering other survivors in suits. We end on a shot of Rebecca’s chest where we see she is the original “Commander.”

I can’t even… I’m going to need a few days to decompress before I can write a proper review of this show that isn’t filled with a lot of expletives about how much I hate this season. I’ll probably wait until after next week’s episode first. But I’m done. I can’t go on with this show, otherwise I’ll just be hate watching. Since this episode was all grounder, all the time, liked it a lot more than in the previous weeks but it still frustrated the hell out of me. Is that a good thing? I guess I care enough that this show is still capable of upsetting me.