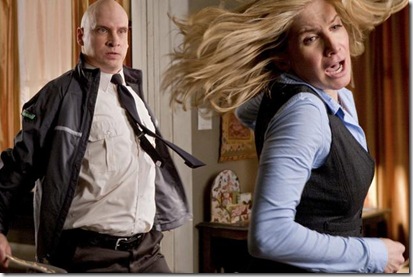 We learn why Father Jack [Joel Gretsch] was attacked and how being healed changes him; we learn more about Chad’s [Scott Wolf] health problem and how he arranges to both deal with the V leader, Anna [Morena Baccarin], and protect himself; we find out what Lisa [Laura Vandervoort] and Anna need from Tyler [Logan Huffman]; Valerie’s [Lourdes Benedicto] pregnancy takes an unexpected turn [and features the first of two call-backs to a certain specific moment in the original miniseries]; Ryan [Morris Chestnut] explains the facts of anti-V life to Erica [Elizabeth Mitchell], and Erica makes a deal with the devil in her quest to set up a resistance capable of standing against the Vs.

Welcome to the War isn’t just an episode title [and a line from the ep – like the previous ep titles], it’s a mission statement. In order to take the next step in developing the resistance, Erica discovers that she’s willing to subvert every ideal she’s ever had. To ensure the safety of her son, anything that gets in her way is toast. Ryan goes to some lengths to learn the secret behind that mysterious vitamin additive, R6 and may have to take his relationship with Valerie to a new place as her pregnancy brings on new side effects. Every action taken in Welcome to the War brings us closer to that war. Every event is the consequence of past actions – and will have further consequences as the season progresses.

There are some moments that just don’t work in terms of internal logic – like an address Erica pulls off Dale’s [remember him?] hard drive [if it was that easy, why hadn’t the FBI already found it?] – but they can be rationalized away with a bit of thought and so, don’t really detract from the ongoing story. Still, writer Scott Rosenbaum needs to be a bit more careful with that sort of thing. Enough of those kinds of lapses and the whole thing will collapse.

In terms of juggling multiple character and plot arcs without making things seem rushed, or forced, director Yves Simoneau is successful. He keeps the pace up and emphasizes the important character moments with significant pauses, artful pans and zooms and knows exactly when to allow an extra beat or to cut to a close-up. Each new ep of V is more intense and Simoneau’s work keeps the intensity level high enough to make the stakes feel real.

For the most part, the performances are solid to terrific – though Huffman still hasn’t found a way to make Tyler seem like a bit of a whiner – and Vandervoort’s Lisa still lacks a scene that let’s us see her do more than smile enigmatically, grin like a love struck fool [to keep Tyler on the hook], or frown pensively around her mother. Both of these characters tend to suck the life out of an ep every time they’re onscreen – and we know Vandervoort, at least, is capable of more from her work on Smallville.

Overall, then, Welcome to the War is a solid, entertaining episode that should keep fans of the series happy and engage new viewers who are coming aboard as a result of last week’s recap special.