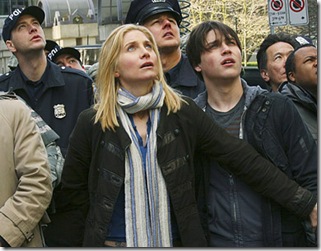 In all, there are twenty-nine such vessels and each is poised above one of Earth’s major cities. Then a hologram of a beautiful, short-haired brunette woman appears in the skies, informing everyone that The Visitors have travelled a very great distance to share their wisdom and technology with humanity – because they are so overjoyed to have discovered us. Each city hears her announcement in its own language. 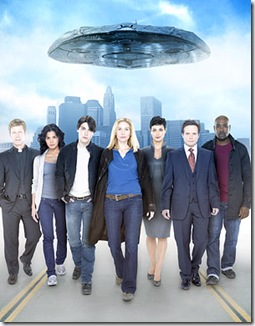 ABC’s new take on Kenneth Johnson’s two critically acclaimed miniseries [V and V: The Final Battle – the less said about the subsequent, awful series, the better] begins in much the same manner as the original, with some notable changes. The Visitors’ spokeswoman is Anna [Morena Baccarin, Firefly, Stargate SG-1], not Diana; our lead characters are a priest and an FBI agent [not a TV journalist/cameraman]; there is a Visitor advance recon force; the allegory of the rise of Nazis is filtered through the present’s post-9/11 sensibilities [the first thing Agent Evans notices after the arrival of the alien ships is that there is a spike in “terrorist chatter].

There are a lot characters, of varying degrees of importance, in the premiere of V and, just as much as we see normalcy before the ships arrive onscreen, we see how all of these people react to the aliens. As the plot moves forward, introducing elements that take on more importance as we see the ripples spread from them – like the introduction of the Peace Ambassador Program [think Hitler Youth]; a group whose leader, Lisa [Laura Vandervoot, Smallville] seemingly takes a shine to Tyler… Naturally, there’s also an underground formed to fight the alien propaganda machine – and it may have been set up by members of the alien advance force who have changed their minds, or just gone native. 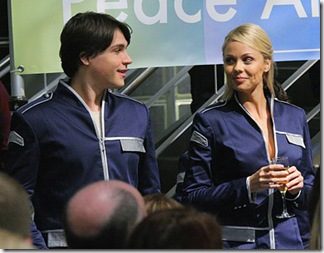 Some of the premiere’s best moments revolve discovering just who is an alien and who isn’t – and whether they’re lizards [as was the case in the original] or not. Others come from seeing people in the street reacting to the revelation that there really is other intelligent life out there – and watching how such a revelation can play havoc with one’s beliefs and ethics.

The re-imagining of V comes from Scott Peters, who created The 4400 and wrote the pilot, and director Yves Simoneau [who also worked on The 4400]. Peters does an admirable job of keeping all the premiere’s arcs clear without sacrificing depth. Simoneau keeps things moving at a decent pace and, because of his prior genre experience, makes the best possible use of the available special effects.

After FlashForward, There is No Normal Anymore is the best pilot of the fall season. Nothing else comes even close.