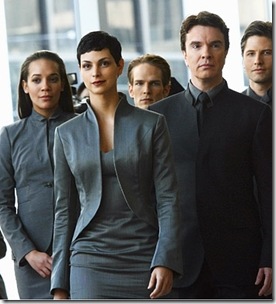 Then an ominous shadow moves over the city as an enormous alien craft moves into place. Just when panic might begin to break out, the surface of the craft becomes a giant HDTV and a beautiful woman named Anna begins to speak. She calls herself and her fellow alien “Visitors” and tells us how thrilled they are to discover that there is other intelligent life in the universe – and that in return for water and an unnamed mineral that exists in abundance on Earth, they will share their technology with us.

Evans finds her son just as the ship moves into place overhead, but she doesn’t look like she believes Anna’s message of all things wonderful. Later, she notes that some terrorist chatter has spiked and she and her partner, Dale Maddox [Alan Tudyk] follow up a lead that has enormous repercussions for both of them – and the world…

Before you know it, there are conducted tours of the alien ships [29 in all] and Decker has compromised his journalistic integrity to interview Anna on a worldwide fee – but only with questions that will show the “V’s” in a positive light. The Vs have set in motion a program called Peace Ambassadors, ostensibly to build peace on Earth and between humanity and the Vs – but we know better because they wear odd blue uniforms that scream “paramilitary!” 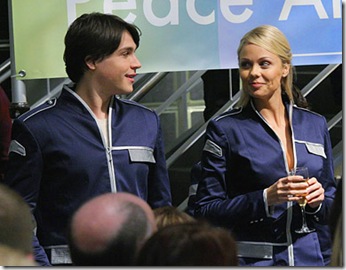 Meanwhile, back at the terrorists’ lair, Evans has gone in, taking advantage of the information give by her source that allows her to be accepted as a member of the group. Turns out that the group isn’t the usual brand of terrorist – they are an underground movement that has been formed to fight the Cs, whom they knew were coming! How? Well, the Vs were lying about this being their first contact with Earth. Much earlier they had dispatched an advance reconnaissance force to learn about humans and pace the way for an invasion. How were they to know that some of their advance personnel would go native and decide humans deserved better?

Even as Evans and the members of the underground are being given proof of the Vs evil intent, Tyler is joining the Peace Ambassadors, whose leader, Lisa, seems to have her eye on him. Shortly thereafter, the underground’s meeting is attacked by a force that includes [gasp!] Maddox! When Evans knocks him out, a fragment of skin falls way to reveal that he is a lizard-guy, too!

Remember Ryan Nichols? The engagement ring guy? Throughout the premiere, he has been bothered by a guy named Georgie [David Richmond Peck] about something mysterious in their past. In between seeing him but the engagement ring and encountering Georgie, we also get to met Valerie [Lourdes Benedicto], the woman he loves [she’s the one who’s smart enough to get into a doorway during the tremors caused by the alien vessel].

Finally, he accepts that he has to act and arrives late to the meeting, but in time to help the budding underground fight off the attacking sleep Vs. In the melee, his human disguise gets ripped, showing that there are Vs who are against the invasion.

In the final scene, Erica Evans and Father Jack sit on the church’s rooftop and decide that they will do whatever they can to thwart the Vs. Normal has become an outdated concept. 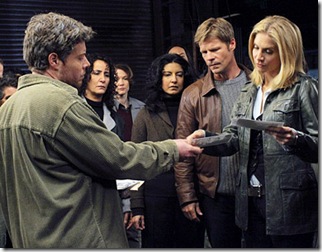 While the new V certainly maintains the allegory of the rise of Nazism in Germany, it also places that allegorical arc within the context of our post 9/11 world. The Vs’ sleeper cells are very Taliban [though, thankfully, their leader is a hot female rather than a tall, skinny guy with scary eyes].

There are other common elements between the Nazis and the Muslim extremists, too: both use propaganda; both are built around the concept of a special people [for the Nazis, Aryans; for the Muslims, the chosen of Allah/God]; both utilize intelligent, if biased, overall plans [though with differing scales], and both are absolutely ruthless – though they camouflage that ruthlessness by trying to appear normal and even benevolent.

On personal levels, it’s interesting to see a show that embraces the possibility that a single mother can try her best and still alienate her child. Evans may be more vulnerable than Mitchell’s Lost character, Juliet, but that vulnerability may have made her try too hard. We don’t see that very often on TV.

Father Jack is very much an idealization of the parish priest, yet still a fallible and human guy. His biggest asset might be that he doesn’t ignore his doubts – even when reminded that the Vatican is all for the Vs. Though the Vs might be able to give Roy back his legs, and Father Jack might be glad to see that happen, he also knows that if something is too good to be true, then it probably isn’t true. 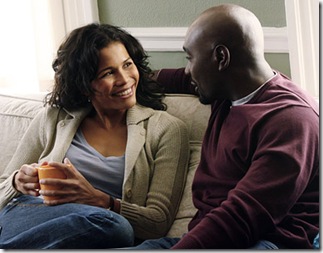 Ryan may be the most interesting character in V over the long haul. As a V who has been on Earth for decades, he represents the voice of sanity from an alien perspective. He has come to know humanity through living and working among us and has seen both the best and worth of us. Somehow, that has convinced him that we are worth saving. As a series regular, this makes him the voice of the pro-Earth Vs – and that makes him pretty much unique.

Tudyk and Mitchell had amazing chemistry in There is No More Normal. He needs to be elevated from one-ep guest status to at least – at least! – recurring status.

Personal rave: Elizabeth Mitchell and Morena Baccarin in the same series. Both actors provide their characters with depth beyond their lines. Both have a gift for knowing how to listen – giving their reactions as much emphasis and importance as their actions.

Suggestion: Humor. The original mini-series wasn’t afraid to acknowledge its alien invasion B-movie roots [can you say “guinea pig?” I knew you could] and have a little fun with those tropes. This update could use a little bit of that sass.

Outlook: if the V writing staff can continue to produce episodes that are as coolly complex – and yet uncluttered – as There is No More Normal, without letting things get murky, then this will be a terrific series.

6 thoughts on “TV Recap: V; There is No More Normal; Cue The Lizard Men!”