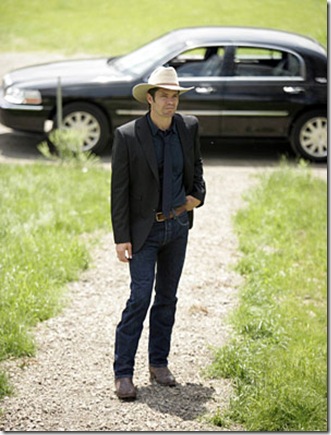 So Givens finds himself back in the state where he mined coal and saw his father spent far too much time in jail – where he once decided that he neither wanted that career, or to follow in his father’s footsteps. And wouldn’t you know it, his ex-wife, Winona [Natalie Zea, Dirty Sexy Money], is a court reporter in town and his old fellow miner, Boyd Crowder [Walton Goggins, The Shield] seems to be running around blowing stuff up in the name of white supremacy. Even better, Boyd’s sister-in-law Ava [Joelle Carter] is recently widowed – via shotgun – from an abusive husband who happened to be Boyd’s brother.

I haven’t read Fire in the Hole, the short story from which Raylen Givens has bounded onto the small screen, but I have read a lot of Elmore Leonard and can say with certainty that series creator Graham Yost has gotten it right with Justified. The language is just a little bit heightened and delivered that an equally little bit faster than what we think of as normal, but it feels as right as Givens’ Stetson.

Givens is a good man, for all his flaws. He might share a jar while on duty, or kiss the former cheerleader/current widow even though she’s the main [only] suspect in a murder investigation, but he’d fair and honest to point of bluntness.

Crowder is smart and puts on a good good-ole-boy front, but he’s as dangerous as angry king cobra – and about as moral. Ava is the cheerleader who married the sports hero who didn’t make The Show – fresh scrubbed, but just a bit frazzled. Winona is the good woman who is smart enough to have moved on, but still harbors a bit of sadness over having done so.

The Pilot is one of those remarkable hours of television where everything seems to have jelled from the start. The cast has great chemistry and the script is good enough that Leonard, who is an Executive Producer on the show, is openly promoting it. The cinematography is expansive when it needs to be and claustrophobic when it needs to be. Pilot master Michael Dinner keeps the pacing where it needs to be to allow for a script that relies on language as much as visuals and neither feels forced or skimped on.

FX provided a screener of the first three episodes [which will air as the series first, second and fourth eps] and they all match up pretty evenly on the quality scale. And each gives givens something different to do – in Miami he was assigned to fugitives, but in Kentucky he has to do a bit of everything: in Riverbrook, he’s assigned to prisoner transfer [with less than perfect results] and in Long in the Tooth [guest-starring Alan Ruck], he gets a second chance to bring in a mob informer turned dentist.

Justified, like Maximum Bob and Karen Sisco before it, deserves to succeed. On FX, there’s a very real chance that will happen.