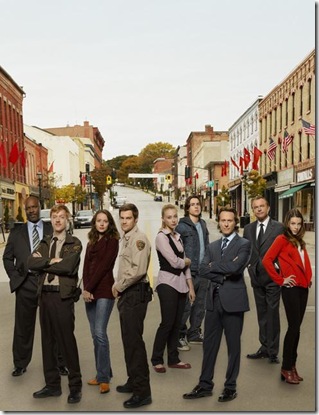 Happy Town’s [ABC, Wednesdays, 10/9C] Haplin, Minnesota is a small town where everyone seems determined to be happy, possibly because after seven years of people mysteriously vanishing, things have been – relatively speaking – normal. Into this seemingly normal small town comes Henley Boone [Lauren German], a smart, pretty young woman who says she’s going to use an inheritance to open a candle shop. Her arrival comes on the heels of the unusual murder of the town eccentric by way of a chisel in the forehead – his screams heard only by a local girl who’s been dropped off by her boyfriend so her parents won’t know [yup, it’s yer basic Romeo & Juliet, subplot].

Other interesting folks include Sheriff Griffin Conroy [M.C. Gainey] who’s very erudite [except when he trances out and talks about Chloe, a woman no one’s ever heard of]; Deputy Tommy “T.J.” Conroy [Geoff Stults], who just wants to be a deputy sheriff in a quiet little town and spend time with his wife, Rachel [Amy Acker] and daughter, Emma[ Sophia Ewaniuk]; Merritt Greaves [Sam Neill], a cultured movie buff whose movie memorabilia shop seems to be thriving though it’s always empty; rooming house landlady Dot Meadows [Lynne Griffin] who forbids access to the third floor of her cozy little place and Haplin family who own the town’s one major employer, a bakery…

The connection between the murder and the disappearances is that a mysterious figure called The Magic Man seems to be involved [Greaves performs a magic trick for Emma – coincidence…?]. The Magic Man is so called because the seven people who disappeared were gone without a single trace. As the surface layer of happiness is rent asunder, secrets begin to be revealed and, eventually, there is another disappearance. Needless to say, no one in Haplin is what they seem to be…

While Merritt Greaves recalls Lucas Buck, of Shaun Cassidy’s American Gothic, Sheriff Conroy comes across like someone out of David Lynch’s Twin Peaks. The town of Haplin could be a slightly more modern Twin Peaks, or Northern Exposure’s Cicely, Alaska. The problem is that the show’s writing isn’t quite one or the other – nor is it a synthesis of all those influences. The result is a series that is filled with potential but isn’t there yet. 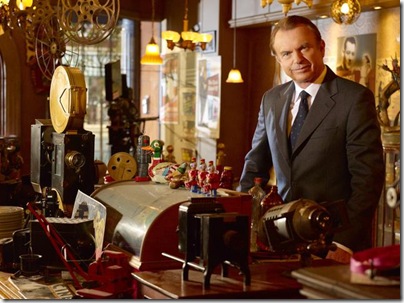 Fortunately, there are a lot of very good actors in the cast and they do a great deal with what they’re given. Gainey, in particular, makes Sheriff Conroy completely believable and even fun – when he’s not going weird and freaky. Neill gets full marks, too, for his silkily ambiguous take on Greaves – is he The Magic Man, or just a middle-aged film buff who does a little slight-of-hand to amuse the kiddies? Frances Conroy [Six Feet Under] is also very good playing the sly Haplin matriarch, Peggy, with a gravity that doesn’t quite disguise her slyness.

On the other hand, Steven Weber’s rude, entitled John Haplin [heir apparent to the Haplin kingdom] is nothing we haven’t seen him do before and he comes off a bit thin here. Sarah Gadon and Ben Schnetzer aren’t especially memorable as Haplin’s Romeo and Juliet – Georgia Bravin and Andrew Haplin – at least when they’re together. Amy Acker is completely wasted as Rachel – though she may be called upon to stretch a bit as the series progresses.

For the series premiere, In This House of Ice, director Gary Fledel keeps things moving and does a good job of creating both the determined happiness of Haplin and the menace that slowly takes over the town as fears arise that The Magic Man might be back. Considering that the script, by Josh Appelbaum, Andre´ Nemec and Scott Rosenberg amounts to a lot of dithering, that’s a solid achievement.

Happy Town does improve over the next few eps, but – while enough to maybe warrant checking out the fourth ep – not quite enough to give it more than a marginal recommendation.