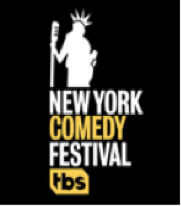 TBS, in association with The New York Comedy Festival (NYCF), announces the 2017 lineup of programming occurring at the first-ever TBS Comedy HUB.

Talent appearing will include Samantha Bee, Ana Gasteyer, the writers of CONAN, the cast and creators of Search Party, The Detour’s Jason Jones and Olan Rogers.

Fans in NYC and across the country can also experience exclusive content from the TBS Comedy HUB via the TBS digital app and social platforms.  The 14th annual New York Comedy Festival runs November 7 – 12, 2017.

NEW YORK, NY (October 17, 2017) –TBS, in association with The New York Comedy Festival (NYCF), announces the 2017 lineup of programming occurring at the first-ever TBS Comedy HUB. Located at the new hotel property PUBLIC, the TBS Comedy HUB will serve as the festival’s headquarters, where fans and NYCF attendees can gain FREE access to exclusive TBS-curated programming, including all-star talent and fan-forward experiences.  Fans in NYC and across the country can also experience exclusive content from the TBS Comedy HUB via the TBS digital app and social platforms.  The 14th annual New York Comedy Festival runs November 7 – 12, 2017.

The TBS Comedy HUB will also feature a photo exhibit ‘The Comedians’ from photographer Limor Garfinkle.  ‘The Comedians’ photo series is comprised of over 35 never before seen portraits of comedians such as Tracy Morgan, Jim Gaffigan, Lewis Black, Jim Norton, and many other NY based comedians.  For the past two years Garfinkle has been working on this personal project, alongside the help of industry professionals and friends who all volunteered their time and skills for the creation of these images.

“With the launch of the TBS Comedy Hub, we continue to evolve our brand across a growing ecosystem of screens and platforms. Our partnership with the New York Comedy Festival further allows fans to interact with TBS talent and TBS series in immersive and entertaining new ways live and virtually.  We’re excited to announce this impressive lineup of programming and experiences,” said Michael Engleman, executive vice president of entertainment marketing and brand innovation for TBS and TNT.

“The addition of the TBS Comedy Hub at the festival adds an entire sphere of national audience conversation and engagement with some of television’s most premiere content,” said Caroline Hirsch, founder and owner of the New York Comedy Festival and Carolines on Broadway.  “We are excited for all of the new experiences, comedians and laughs that will pass through the HUB during the course of the festival.”

THE DETOUR
Friday, November 10th from 5PM – 6PM
TBS Presents: The Detour S3 Premiere Screening with Jason Jones
Join us for an exclusive season 3 premiere screening of TBS’ The Detour followed by a Q & A with writer, Executive Producer and star, Jason Jones.
Created, written and executive-produced by Jason Jones and Samantha Bee, The Detour is an all-too-honest look at the family dynamic. Jones stars in the acclaimed comedy with Natalie Zea, Ashley Gerasimovich, Liam Carroll and Daniella Pineda.

Coming to TBS, Final Space is a serialized animated sci-fi comedy created by “The Tennessee wonder child” Olan Rogers. Rogers is an independent filmmaker, actor, comedian and entrepreneur with close to a million YouTube subscribers. Rogers and David Sacks are writers and executive producers for the TBS original, which is being produced by Conan O’Brien’s Conaco, New Form and in association with Turner’s Studio T. Rogers will also star in the animated series with Fred Armisen, Tom Kenny, David Tennant, Tika Sumpter, Steven Yeun and Coty Galloway.

SEARCH PARTY
Sunday, November 12th from 11AM – 2PM
Search Party Presents: S1 Binge & Bloody Maria Brunch
Fans are invited to a Search Party season 1 binge-a-thon while they enjoy a hosted brunch over Bloody Maria’s.
TBS’s Search Party is a single-camera dark comedy about four self-absorbed 20-somethings who become entangled in an ominous mystery when a former college acquaintance suddenly disappears. Alia Shawkat, John Early, Meredith Hagner, John Reynolds and Brandon Micheal Hall star in the series, which was hailed as one of the best new shows of 2016.

The 2017 NYCF is presented in association with TBS.  The festival is produced by Carolines on Broadway. Sponsors of the festival include Citi, Samuel Adams, iHeart Radio, New York Magazine, the New York Post, Variety and Vulture.

More information about the festival can be found on all of its social media platforms: