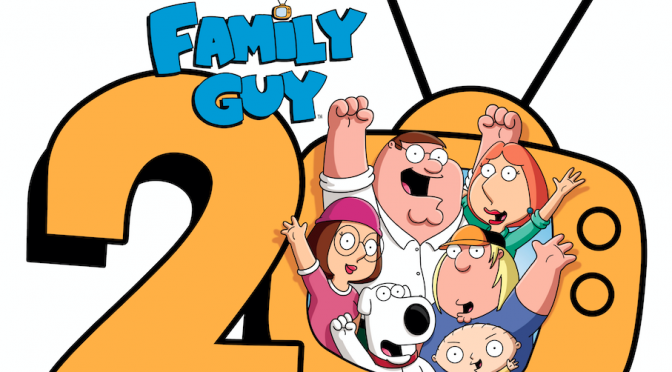 On April 15, TBS will celebrate the 20th anniversary of Family Guy with a marathon of Seth MacFarlane’s top 20 episodes.

The marathon is set to run from 10:30 AM – 10:00 PM on TBS, leading into a new episode of American Dad! and a re-run of the Family Guy / American Dad! / Cleveland Show crossover episode.

With MacFarlane’s commentary on each episode, the linear schedule is below.

10:30 AM – “Road to Rhode Island”
Brian goes to California to escort Stewie home from his visit with his grandparents.

“This was the first Stewie/Brian road show we ever did, and it’s the first episode that firmly established their unique relationship. It was our fresh take on that classic old trope of a dog and a baby hitting the road together.”

11:00 AM – “Brian Wallows and Peter’s Swallows”
Brian is sentenced to care for a crabby old woman; Peter’s beard becomes a home for birds.

“This episode won us an Emmy for its musical number. Before that, none of us had never seen an Emmy before.”

11:30 AM – “North by North Quahog”
During their second honeymoon, Peter and Lois stumble upon a horror too great to bear: Mel Gibson’s Passion of the Christ 2.

“Our first episode back from cancellation. It was a comedic riff on a Hitchcock classic, complete with a Bernard Herrmann score. This is the type of whip-smart, nuanced writing I was capable of 10,000 drinks ago.”

12:00 PM – “Petarded”
After winning at Trivial Pursuit, Peter claims to be a genius, so Brian asks him to take an IQ test to prove it.

“This is a brilliant episode and just so Twitter knows, I was out with the flu the day they came up with the title.”

12:30 PM – “PTV”
Peter broadcasts a television station out of the Griffin home.

“This episode was the culmination of our completely wholesome, non-sexual relationship with the FCC.”

1:00 PM – “Brian Sings and Swings”
A near-death experience lands Brian in the hospital but infuses him with a new passion for life.

“This episode featured our dear friend, the wonderful Frank Sinatra Jr. It’s also when I realized that if you have songs in an episode, you have to write way less.”

1:30 PM – “Patriot Games”
At his high school reunion, Peter pretends to be a millionaire, but the truth comes out when he meets Tom Brady and loses all self-control.

2:00 PM – “The Griffin Family History”
The Griffins get robbed; Peter narrates a chain of events in world history that explains the Griffin name.

“A fun premise and a great-looking episode. This was our first real foray into a non-traditional format.”

3:00 PM – “Blue Harvest Pt. 1” & “Blue Harvest Pt. 2”
With the Griffins stuck at home during a blackout, Peter begins to tell a story, which leads to a Star Wars flashback. Acting out scenes from Star Wars Episode IV: A New Hope, Peter plays Han Solo, Lois is Princess Leia, Stewie becomes Darth Vader, Brian plays Chewbacca, and Chris is Luke Skywalker. Cleveland and Quagmire will play the parts of R2-D2 and C-3PO, while Herbert is the wise Obi-Wan Kenobi.

“This episode is what finally put Star Wars on the map.”

4:00 PM – “I Dream of Jesus”
Peter rediscovers his love for the painfully annoying song, “Surfin’ Bird” which drives people around him crazy; and when Peter finds Jesus in a record store, he’s determined to be his new best friend.

“The bird is still the word.”

4:30 PM – “Road to Germany”
Mort Goldman accidentally steps into a time machine and winds up in 1939 Poland in the middle of the Nazi invasion. Brian and Stewie follow him to Nazi Germany in an attempt to save him and bring him back to the present safely.

“This was our homage to Herman Wouk’s ‘The Winds Of War.’ And sadly, if you’re an American male under age 35, studies show this episode is all you know about World War II.”

5:00 PM – “Road to Multiverse”
Stewie and Brian visit alternate universes and become stuck in one ruled by dogs.

“Back before Walt Disney’s Family Guy was a real thing, it was a fake thing.”

6:00 PM – “Brian Griffin’s House of Payne”
Brian’s television pilot script gets picked up by a network, but he’s horrified when changes are made to his concept; Chris and Meg accidentally knock Stewie unconscious.

“We wanted to see if our characters were interesting enough to sustain a full episode in one room, without gags or cutaways. In Hollywood, this is called a “bottle episode,” because it only utilizes one set, and also because the writers were drunk.”

7:00 PM – “And Then There Were Fewer Pt. 1” & “And Then There Were Fewer Pt. 2”
People throughout Quahog are summoned to a mysterious mansion, where actor James Woods hosts a dinner party to atone for his misdeeds and guests begin dying, one by one. After more of James Woods’ dinner party guests meet grisly fates, the identity of the mysterious killer is revealed.

“I think this is my favorite episode of the series. A classic format, great-looking direction, and, I hope, a genuinely surprising ending. It was also the first episode to air in HD. It was really cool to finally see Lois’s pores.”

9:00 PM – “The Big Bang Theory”
Using the time machine, Stewie and Brian accidentally travel outside the space-time continuum, where Stewie causes an explosion that creates the universe; Bertram travels back in time to kill one of Stewie’s ancestors: Leonardo da Vinci.

“This was based on a story I wrote in college. The A.V. Club gave this episode a B, which is their highest rating I think.”

9:30 PM – “Back to the Pilot”
Brian and Stewie travel back in time to January 31, 1999, and witness the events that took place in the very first episode of Family Guy, “Death Has a Shadow”.

“It was fun to re-visit an era before I hired people who could draw better than me.”

10:30 PM – “Hurricane”
Stan attempts to save his family after a hurricane floods Lower Langley — despite Fran’s warnings that Stan is a bad decision-maker during a crisis.