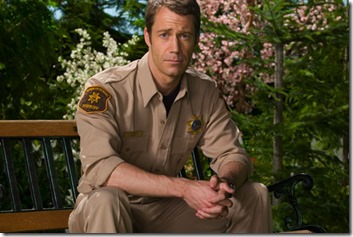 Haven enters its fourth season with a mysterious, handsome stranger getting a juicy, season-long arc. How handsome? Sheriff Jack Carter handsome! Eureka’s Colin Ferguson will play a character whose secret agenda leads him to Audrey Parker (whom you will recall vanished into thin air at the end of season three).

Haven went into production of its thirteen-episode fourth season today. Follow the jump for the official press release.

NEW YORK, NY – May 8, 2013 – Startling new mysteries and secrets are in the works as Syfy’s hit series Haven goes into production today, May 8, on an all-new 13 episode Season 4 in Halifax, Nova Scotia.

Season 4 of Haven picks up six months after the devastating events of the Season 3 cliffhanger in which the town was pummeled by a violent meteor storm.  Audrey and Duke (Eric Balfour) vanished into thin air leaving an injured Nathan (Lucas Bryant) marooned in Haven.

Ferguson recently starred as the lovable Sherriff Jack Carter on the long-running hit Syfy series Eureka. Ferguson was also a producer on the series and directed several episodes. Ferguson’s many feature film credits include Because I Said So, Rowing Through and The Opposite of Sex. He has also starred in a number of movies for television and was a regular on the NBC remake of the hit British comedy series Coupling and the sitcom Then Came You. His many guest-starring roles include CSI, Malcolm in the Middle, Crossing Jordan and Becker.

Haven is produced by Entertainment One and Big Motion Pictures in association with Piller/Segan/Shepherd and airs on Syfy in the US, Showcase in Canada and internationally on UNI’s multiple Syfy Universal channels. Entertainment One controls the worldwide distribution rights to the one-hour series and concluded a deal with Germany’s Tele München Group (TMG) for the television rights in Continental Europe.

Entertainment One Ltd. (LSE:ETO) is an international entertainment company that specializes in the acquisition, production and distribution of film and television content. The company’s comprehensive network extends around the globe including Canada, the US, the UK, Ireland, Spain, Benelux, France, Germany, Scandinavia, Australia, New Zealand, South Africa and South Korea. Through established Entertainment and Distribution divisions, the company provides extensive expertise in film distribution, television and music production, family programming and merchandising and licensing. Its current rights library is exploited across all media formats and includes more than 35,000 film and television titles, 2,700 hours of television programming and 45,000 music tracks. http://www.entertainmentonegroup.com

Universal Networks International, the international channels division of NBCUniversal, is one of the world’s premier entertainment portfolios, delivering quality content and compelling brands to over 176 territories across Europe, the Middle East, Africa, Latin America and Asia Pacific.  The brands in the portfolio include Universal Channel, Syfy, 13th Street Universal, Studio Universal, E! Entertainment Television, The Style Network, DIVA Universal and Golf Channel. These unique brands deliver a full range of entertainment experiences to local audiences across the globe. Universal Networks International also operates Movies 24 and has a controlling interest in the KidsCo joint venture.