His arrival throws a spanner into the works for his sister, her husband, the British East India Company and the Crown. And we’re just getting starting!

Delaney (Tom Hardy) returns to his family home to reunite with childhood friend (and family servant) Brace (David Hayman), but he is much changed from when he left. There is an element of magic to him – he knows things he shouldn’t know. He also carries himself with an animal grace that could easily be misconstrued as swagger.

His arrival means that his sister, Zilpha (Oona Chaplin) and her husband Thorne Geary (Jefferson Hall), get nothing. She is not mentioned in his will – which states that James inherits everything. Everything being the house, the remains of the Delaney Trading Company and Nootka Sound.

The series was created by Steven Knight (Peaky Blinders), Tom Hardy and Chips Hardy and is a showcase for Hardy’s natural charisma – he’s in almost every scene.

In the three episodes made available for review – all written by Knight and directed by Kristoffer Nyholm – the stage is set, key players introduced and an almost ethereal gloominess of tone set.

Nootka Sound is on the tip of what is now Vancouver Island – a situation perfect for setting a trading route to China and, thus, of strategic importance to The company, the Crown and America. Delaney’s announced intention not to sell makes him a target. If he dies, his sister inherits and would be willing to sell.

Delaney is quick to make waves – he immediately sets out to reclaim the Delaney Trading Company’s offices (in a building which now houses a bordello – run by the woman who claimed Delaney’s virginity) and begins to search the house for the actual treaty signing the property to his father (who also bought his bride – a detail that leads into some weirdness that first suggests the possibility of magic being involved somehow).

Director Nyholm and cinematographer Mark Patten quickly establish the mood and texture of the series – fog, murk and gloom – with a palette of blues, greys and dirty browns as the base on which the visuals are built. When Delaney has what appear to be visions (I did mention the possibility of magic…), the palette shifts to blacks and very pale blue-greens – the visions are flashes of what looks like a Native American woman in cloak of ravens’ feathers. 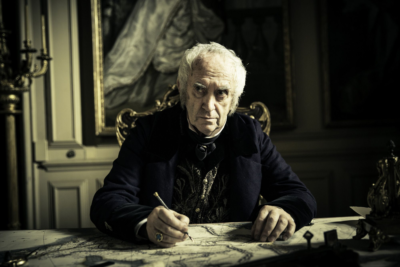 We also meet the board of The Company – in particular, what we would call the CEO, Sir Stuart Strange (Jonathan Pryce) – and in a short time, we come to know them as evil personified (living up to the historical record and then some…).

Strange is willing to do anything to acquire Nootka Sound – anything at all – and he has a temper that flares up like a star going nova. In that, he is the polar opposite to Delaney, who gets colder and quieter the angrier he becomes.

Adding to the general mood of the series is the production design – the only opulence is found in the offices of The Company. Delaney’s home looks like it was abandoned decades ago – peeling wall paper, poor lighting, worn fixtures and commercial furniture – and most of the other sets are equally dingy.

Combined with the specificity of the language and the result is very much Dickensian. One could see the Artful Dodger lurking about, ready to pickpockets – or pre-redemption Scrooge humbugging about.

The pacing is also Dickensian – which is to say, measured (a hair slower than deliberate), with time spent on shots establishing locations and sets as well as seeing how characters behave.

The result is richly detailed and not without a certain odd charm and wit, but if you’re looking for an action-packed showcase for Hardy, you might be disappointed.

Though are moments of action, Taboo is a period drama of a kind that one might expect from a British network. It continues FX’s track record of going for quality across different genres. It’s a completely unexpected gem.