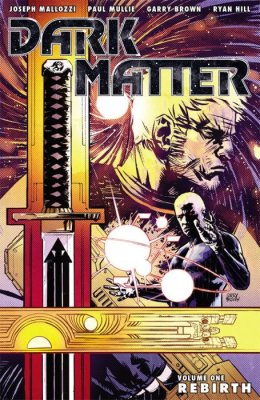 Joseph Mallozzi and Paul Mullie, veteran writers/producers from the Stargate franchise, have sold a space opera, Dark Matter to Syfy. The series will be produced through Prodigy Pictures whose Lost girl is about to enter its final season on the network.

Based on their Dark Horse Comics graphic novel, Dark Matter details the circumstances in which the crew of a derelict spaceship is awakened from stasis with no memories of who they are or how they got on board. The series is planned for airing in 2015. For more, follow the jump.

The 13 one-hour episodes will be based on the graphic novel Dark Matter by Mallozzi and Mullie, published by Dark Horse Comics, and will air on Syfy in 2015.

In Dark Matter, the crew of a derelict spaceship is awakened from stasis with no memories of who they are or how they got on board. Facing threats at every turn, they have to work together to survive a voyage charged with vengeance, betrayal and hidden secrets.
In making the announcement, Chris Regina, Senior Vice President, Programming, Syfy, said: “Dark Matter is a refreshing and entertaining space opera that blends an intriguing premise with fast-paced suspense. It will be a terrific addition to our prime time schedule next year.”

Said Jay Firestone, Prodigy Pictures: “We’re thrilled to be working with Joe and Paul, who have created a series that revolves around compelling characters that will keep its viewers guessing what’s coming up next.”

Said Cathy Payne, Chief Executive, Endemol Worldwide Distribution: “We are excited to be involved with Dark Matter and look forward to launching this internationally in 2015, concurrently with Syfy.”

Dark Matter joins Syfy’s international co-productions Z Nation and Olympus (which premieres in 2015) along with popular acquired series such as Lost Girl, Spartacus and Bitten.

Founded in 2006 by Jay Firestone and later joined by executive producer Vanessa Piazza, Prodigy Pictures leads the way in the production of quality television, film, and cross-platform media. Prodigy is responsible for the critically-acclaimed television series Lost Girl, which has electrified viewers around the world and amassed a cult-like following. Lost Girl just wrapped production on its final season. Prodigy’s other credits include indie horror The Dark Stranger and the original television miniseries XIII as well as XIII: The Series.

Endemol’s credits in non-scripted entertainment include worldwide hits such as Big Brother, Deal or No Deal, Wipeout, The Money Drop and Your Face Sounds Familiar. The company’s growing portfolio of award winning drama and comedy includes international titles such as The Fall, Peaky Blinders, Hell On Wheels, Benidorm, Ripper Street, Black Mirror, Bad Education, Mad Fat Diary, Hot in Cleveland, Kirstie, Leverage, Home and Away, Death Comes to Pemberley and The Crimson Field.  As one of the world’s largest independent content distributors, Endemol launches over 80 new entertainment formats a year on broadcast networks across the globe and distributes more than 33,000 hours of finished programming. The company’s creative teams around the world are continuously developing new ideas that are shared across the Endemol network. Endemol is headquartered in Amsterdam, the Netherlands.