The first season that  Supernatural  premiered on The WB Network, it was uncertain as to whether it would get a second season.  The year was 2005 and it was a time of difficult transition that combined The WB and The UPN networks to form The CW, where the new direction was soon for shows geared towards teen girls (Gossip Girl, 90210, The Vampire Diaries). A supernatural, sci-fi, horror show about two demon-hunting brothers hardly fit into the target demographic at the time.  But along with all the magic, mystery and urban legends that the show tackled each week, something magical was also happening with the viewing audience.  The show was connecting on an unprecedented level to a wider audience, not just teen girls, thus building its fanbase with each passing episode. A fanbase which then took to social media en masse to spread the word and gain even more support. Those early actions blossomed into a voracious fanbase who kept the show in the public eye and indirectly helped in keeping it on the air for the next decade and counting.  The true magic was not in the ghosts, witches and legends encountered every week, but in the way the relationship between brothers Sam and Dean Winchester resonated with that growing audience and kept them coming back for more. The chemistry, and enduring real-life friendship between actors Jared Padalecki and Jensen Ackles came together to create a bond between unforgettable characters that has endured for 14 seasons and shows no sign of slowing down.

A family reunion of epic proportions, eleven years in the making, is coming to Supernatural for the 13th episode of the season.  This is also going to mark the amazing achievement of 300 episodes aired and help the series continue to hold the crown as the longest-running American sci-fi series. Ever.

The CW gifted Supernatural an early renewal for Season 15, a far cry from that first few season, which ended on a cliffhanger that brought a collective gasp to its viewing audience and an uneasy feeling that there would never be resolution. Luckily the series was renewed and as the story unfolded it was revealed that patriarch John Winchester sacrificed himself to a demon in order to save the life of older son, Dean.  John would be seen one last time at the end of season 2 as he escaped through an open gate to Hell to help his boys, before finally moving on to “a better place.”  That was the last time viewers saw John Winchester, although the character has been prominent throughout the series, whether in references or flashbacks.  The character was portrayed by Jeffrey Dean Morgan who, at the time, was known for the heartbreaking role of Denny Duquette in Grey’s Anatomy, and is currently busy portraying the vicious villain Negan on The Walking Dead.  As an actor with an incredibly busy schedule, it was always difficult to coordinate further appearances on Supernatural even though, by all accounts, it was something that was on everyone’s To-Do list.

Jeffrey Dean Morgan offered a pre-holiday tease showing that indeed the stars had aligned and that he would be reappearing on his old alma mater. 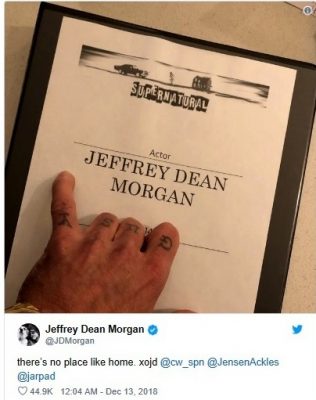 Confirmation was further provided by Executive Producer Andrew Dabb who stated, “We’re incredibly excited to have Jeffrey back for this milestone episode, and think fans will love what we have planned for his character…and a few other surprise guest stars.”

In addition to Jeffrey Dean Morgan, one of those surprise guest stars is rumored to be the return of Kurt Fuller and his character the angel Zachariah, who tormented the Winchesters in season 5 before being killed off.  Interestingly enough, it was Zachariah who first informed Dean Winchester that his body is the destined host for the archangel Michael, with whom Dean is struggling throughout this season.

Of course, a character death on Supernatural is never to be interpreted as over and done, considering how often the main characters have died and come back. Not to mention the return of their mother Mary, whose death at the beginning of the series became the catalyst for the family to turn to a life of demon-hunting. And the recent return of beloved substitute father-figure Bobby, who many fans view as correcting a wrong carried out several seasons ago when his character was killed off.

Executive Producer Robert Singer later added, “We had a lot of talk about it, and we pretty much knew that we weren’t going to top the 200th with the music, so we decided to go in really a kind of different direction. The idea that we know that the bunker is in Lebanon, Kansas, but we’ve never been to Lebanon, Kansas, we don’t know how the people of the town react to our guys, so we’re going to see Lebanon for the first time and some of the people in it. It’s a much more personal story, and kind of a more emotional story than the 200th, so it’s a good deal different, but we’re really happy with it, and I think it’s gonna turn out great.”

Jared Padalecki, who portrays younger brother Sam Winchester, speaking to TV Guide during the 300th Celebration party stated, “There’s some scenes that also make it come full circle. For Sam specifically… we see [him] get some reconciliation that he hasn’t really had, he’s been desiring. He didn’t even know he was really looking for this. We see him tie up some loose ends and really make the most of his situation, and it’s a pretty awesome situation.” 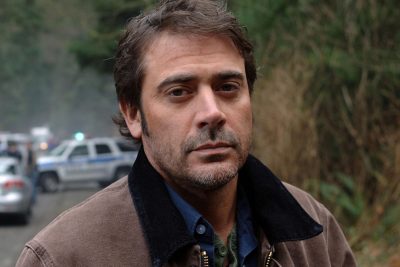 The hunting of things that go bump in the night was established to be a family business. The mother of the Winchester brothers, Mary, was recently resurrected from the dead herself, and came from a family of hunters.  It was also revealed that their grandfather Henry was a member of the Men of Letters, a version of hunters who used their wit and extensive knowledge to battle monsters, instead of their brawn.  The Men of Letters had a bunker in Lebanon, Kansas, which served as their headquarters and contains a multitude of books and artifacts useful in dealing with various monsters and paranormal elements. For several seasons now, this bunker has been the home base of the Winchesters and their growing legion of family, friends, and co-workers.  Tonight’s episode will focus on the town of Lebanon and its inhabitants, and give a peek into their thoughts concerning the town’s strangest residents.  It also appears that the brothers will stumble upon an ancient Chinese artifact with the power to grant wishes or rather “give you what your heart desires”, and possibly alter reality in some form. The ultimate goal will be to use the artifact and wish for the expulsion of Michael, the archangel that is currently trapped in Dean’s head and causing certain torment. At some point Dean will wish to see his father once again and viewers will thus be treated to the moment they have waited a dozen years to see — the resurrection in some form of John Winchester.  It will be interesting to see if the door will be left open for another possible future return.

As is fitting for a milestone of this proportion, the cast and crew was able to celebrate in an elaborate black-tie party several weeks ago.  We now join in and extend our congratulations to all involved with the show for reaching episode #300, and express our wish for many more years of scary entertainment in the adventures of the Winchester brothers. 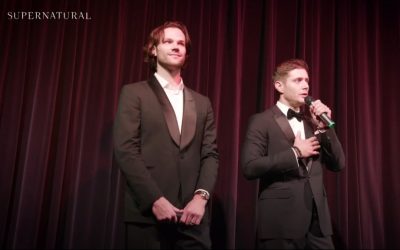 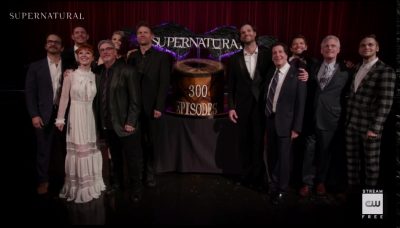 Samantha Smith, who portrays matriarch Mary Winchester, summed it up when describing her character’s reaction to the events in the episode. “Unbridled joy… shock and then joy. I think that John is the love of Mary’s life and that would be anyone’s dream come true, right?”

For die-hard fans, it will most certainly be a dream come true to see the Winchester family reunited once again!

The 300th episode titled “Lebanon” can be seen tonight on The CW, 8pm.