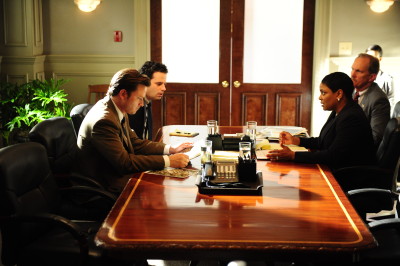 Rectify: The Case Against will help newcomers get up to date so they can start in on the season three premiere, as well as give fans who haven’t re-screened the first two seasons since last summer a quick refresher.

The network describes Rectify: The Case Against as ’16 hours in 16 minutes.’ For more, follow the jump.

Over the past year, riveting crime stories – real and fictional – have captivated audiences and raised the bar on storytelling, with two in particular receiving Peabody Awards for the caliber of their content.

One is SundanceTV’s drama “Rectify,” which returns for its third season Thursday, July 9th at 10:00 PM ET/PT; the other is the groundbreaking true crime podcast “Serial.” Fans of both series have drawn parallels between the two: the flexibility of memory, the meaning of guilt vs. innocence, and more (a recent article in The Guardian discusses our fascination with these stories).

With that in mind, SundanceTV has created a catch-up tool that pays homage to Sarah Koenig and the NPR team: “Rectify: The Case Against.” Written by Kate Powers, “Rectify” staff writer and Writers Guild Award nominee, the podcast provides a stirring narrative of the first two seasons of 16 episodes, recapping what we know about Daniel Holden’s case.

In this age of binge viewing and overwhelming TV options, this podcast gives fans “16 hours in 16 minutes,” so they can catch up in time for season three, or get a refresher if they haven’t watched since last summer.

“Beautiful, brilliant, and unlike anything else on television”

“A master class in nuance.”

The highly anticipated third season of “Rectify” premieres Thursday, July 9th at 10:00pm ET/PT on Sundance TV. “Rectify”follows the life of Daniel Holden (Aden Young), who returns to his small hometown in Georgia after serving 19 years on death row. Having spent his entire adult life waiting to die, Daniel must now try to find a way to cope with his past and forge a “normal” life with a future before him. Daniel, who is still struggling with adapting to the routine aspects of modern life, affects everyone whom he comes in contact with from his very fractured family, to those working to protect him and those working against him on the side of law and order, and those in his hometown who never knew him, but now, upon his return, curiously seek complicated adult relationships with him.

Season three of the hour-long drama picks up immediately where season two left off, on the very afternoon of Daniel’s plea deal.  Will the deal be accepted?  Will Daniel be forced to leave town?  And when the body of a missing person is discovered, law enforcement once again turns to him for answers.  As Daniel’s devoted sister Amantha (Abigail Spencer) attempts to live her own life, she is given an opportunity at a local store that for the first time in a long time has nothing to do with her brother.  Meanwhile, Tawney (Adelaide Clemens) and Ted Jr. (Clayne Crawford) struggle to see if their marriage has a future by delving into their pasts for answers. Janet (J. Smith Cameron) and Ted Sr. (Bruce McKinnon), also under pressure from Daniel’s actions, will find that their marriage is put to the test as well.

“Rectify” was created and written by Writers Guild Award-nominated Ray McKinnon (writer and director of The Accountant; actor in “Deadwood,” “Sons of Anarchy”).  It is executive produced by McKinnon, as well as Mark Johnson and Melissa Bernstein, the award-winning producers behind AMC’s “Breaking Bad” and “Better Call Saul.”