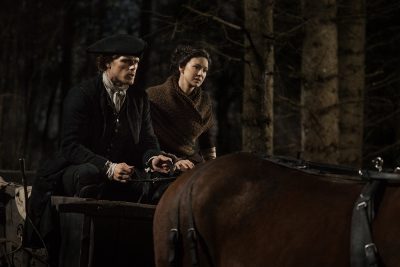 STARZ TREATS FANS TO AN EXCLUSIVE LOOK AT SEASON FOUR OF “OUTLANDER,” AIRING A SCENE FROM THE FIRST EPISODE OF SEASON FOUR ON  SUNDAY, JANUARY 14TH

Following a Broadcast Marathon of “Outlander” Season Three,
STARZ Will Air an Exclusive Scene from the First Episode of the
Eagerly-Awaited Fourth Season

Beverly Hills, Calif. – January 11, 2018 – In anticipation of the upcoming season four return of STARZ Original series “Outlander,” Starz is filling the “Droughtlander” void among viewers with a preview of the brand new season. First, fans can relive the big moments of season three that found Claire and Jamie separated for over 20 years, and leading up to their epic reunion and beyond, by binge watching all 13 episodes of the third season starting at 9:05AM ET/PT and watch it all culminate to the broadcast of an exclusive first-look at a scene from the season four premiere episode at 10PM ET/PT on Sunday, January 14th only on STARZ. Season four of “Outlander” is currently shooting on location in Scotland and will air later this year.

The critically-acclaimed third season of “Outlander” averaged 5.6 million multiplatform viewers per episode, while averaging 5.2 million multiplatform viewers for all three seasons.* In 2017, Outlander was the second-most viewed premium scripted series among women (behind “Game of Thrones”), and was regularly a Top 5-rated cable drama with women.** “Outlander” is one of only six current premium scripted series to increase its episode premiere ratings in Season 3 from Season 1.*** The series is currently in production on its fourth season and will return in 2018 on STARZ.

“Outlander” is the hugely successful drama based on Diana Gabaldon’s eight-book Outlander series that has sold more than 28 million copies worldwide and all the books have graced the New York Times best-sellers list. The “Outlander” series spans the genres of history, science fiction, romance and adventure in one amazing tale.