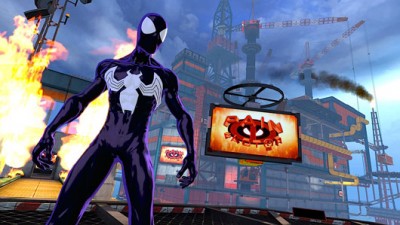 Spider-Man Shattered Dimensions was on my must play list of games for the fall season. One of the producers of the game gave me an Eyes On Demo earlier this year and I’ve tracked the game’s progress since that time. I loved Web of Shadows from a few years back, but hated all the other Spider-Man games because I’m not a fan of Open World Sandbox games. Web of Shadows does a fantastic job of blending Open World mechanics with story driven narrative, I never felt lost or like everything was pointless and the web combat and web swinging was pretty tight.

Shattered Dimensions was supposed to bring the best elements of Web of Shadows, while bringing something new, namely the idea of play four different versions of Spider-Man. Beenox – The developers, do a fantastic job of making the worlds – Noir, Ultimate, 2099 and Amazing feel really distinct from one another in terms of look but they dropped the ball on the most basic things and that’s Spider-Man’s powers. While I don’t like Sandbox games, I’m forced to admit Spider-Man is a character where it’s a necessity.

Instead of feeling the freedom and fun of Web Swing it felt contrived and difficult to control. I never figured out how to climb up and down on my webs and I frequently fell. That’s right, Spider-Man FALLS of his webs – a lot, you have to time it so that you first web “jump” by pressing the R2 button and once you are in the air tap the R2 button quickly to zip to predetermined spots. If you forget to do this than you can fall into a pit or something and the game doesn’t give you the ability to simply stick to one of the mountains and simply crawl back up. Unlike previous Spider-Man games you also don’t have the ability to web swing everywhere in the game. 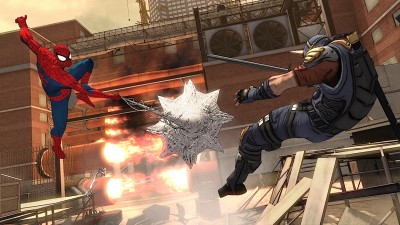 It was frustrating, I’m supposed to be Spider-Man but the game also gimps Spider-Man’s basic power, which is the ability to stick to things. You are in these worlds but you can’t explore anything and your powers don’t even work half the time. Which is probably a good thing because when you are able to crawl around the various walls the game becomes an unplayable mess due to the Camera going completely wonky – to the point of giving me severe headaches.

The Noir World lets you get your stealth on, but it becomes unnecessarily difficult because Spider-Man is so weak that all it takes is a couple of hits from the bad guys to take you down. Also stealth is such a major thing here, but the broken camera makes it nearly impossible to use, after an hour of trying to crawl on the ceilings and getting vertigo I eventually gave up and just skulked around corners to take enemies down. What’s the point of being Spider-Man if I can’t effectively stalk my pray from the ceilings?

Graphically, the game looks polished and shiny to the point where the worlds don’t have much life to them. The water in the waterfalls look shiny, but don’t move, the grass looks like photographs. It looks like a tech demo for a glossy new game engine where you look at it, go wow and immediately start imaging how powerful this would be but the Worlds feel “empty.” Activision went out and hired actors who have voiced Spider-Man in various cartoons to voice the different Spider-Men and Stan Lee does his patented cheesy narration to add to the ambiance.

The game has an RPG element that let’s you purchase additional abilities as you progress through the game. I wish games would have an Arcade mode that lets casual players unlock everything and just have fun, as opposed to slogging through and unlocking various items.

I love the design of all the worlds and where the developers where trying to go with the different levels, each world has it’s own unique flavor but it starts to feel like window dressing because the bad guys are all fairly generic and there’s nothing really different about Spidey’s fighting style. I wanted to love this game, but three hours into it, I doubt if it’s a game I’ll ever care enough about to finish. Everything just feels kind rushed and a not fully thought out – beyond the basic premise. I understand and appreciate that they wanted a more confined and arcade like experience but somewhere along the way they forgot who Spider-Man is supposed to be. I feel dumb actually spending my own money on this when I know I eventually have gotten a review copy. Spider-Man: Shattered Dimensions is available on all platforms. This review is based on the PS3 Copy.

Ok, I find the game to be strangely addictive – as long as I don’t do any Wall Crawling (which is a dumb thing to say about a Spider-Man game).