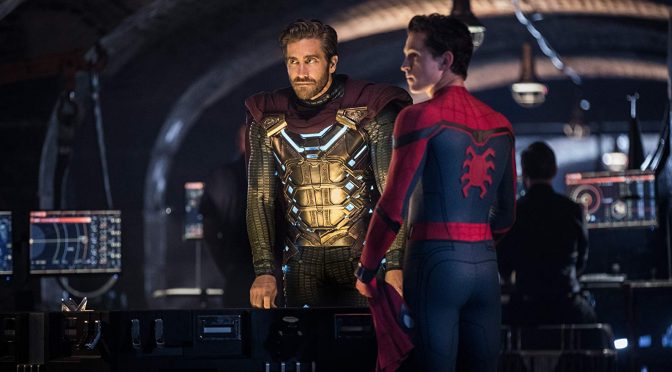 I feel like I need to say this before any Marvel review this year, I’m a long time Marvel comic book fangirl, but I’ve never been a MCU can do no wrong fan girl. In my eyes, they’ve done plenty of wrong. I absolutely detested Spider-Man: Homecoming. Ok, that’s a bit harsh, I loved Michael Keaton as the Vulture but didn’t like much else about it. To this very day, I haven’t bothered to watch it 2nd time. With that said, a lot of my issues from the Homecoming remain in Far From Home but there is so much greatness here that after End Game and Captain Marvel, it’s time I come out of the closet and join the Marvel can do no wrong club – except for a few minor quibbles this is an almost perfect summer film with a post credit sequence that blew my mind.

Let’s get my gripes out of the way so I can focus on the good. There were two reasons I hated Homecoming: 1) they made Peter Parker (Tom Holland) a complete idiot throughout most of the movie and 2) Iron Man overshadowed everything. In Far From Home this Peter Parker has been Spider-Man for a little while now and seems to be a little more self-assured in his abilities than he was in the previous outing. Although I still hate the fact that they turned Spider-Man’s “Spider Sense” into a cheap joke by calling it the “Peter Tingle,” and not really utilizing it to its full potential.

From the opening moment to the end, make no mistake, this movie is all about Tony Stark and that rubbed me the wrong way because as an old school Spider-Man, Peter is an independent thinker, a genius in his own right and more than simply Tony’s “child.” And that’s how Homecoming treated him – like he was an immature child and Tony’s the disapproving dad. It was maddening and Far From Home follows that same template with added weight.

This movie is basically about PTSD and dealing with and moving on from loss. Which, was what End Game was about as well, only this time it’s not the Avengers dealing with defeat pt’s Peter and the world trying to get over Tony’s sacrifice and everything that happened in what, everyone calls, “The Blip.”

One of the central plotholes from the last film about how Peter’s entire class got snapped is not explained and what happened during those missing years isn’t really explained other than introducing Brad Davis played by Remi Hii) a character who was someone’s little brother who suddenly grew up during the “blip” to be a rival for M.J’s (Zendaya) affections.

I know it seems like I’m being overly negative, but I really did love this movie. The Iron Man stuff aside this is the Spider-Man that I wanted. Peter is still young and still trying to learn how to juggle being Spider-Man with his personal life. After the weighty events of End Game, he just wants to go on a class trip to Europe and figure out a way to ask MJ out. Simple teenage stuff. His trip is interrupted when elemental Water and Sand Creatures attack London and Peter is forced to into action.

Luckily he’s not alone and finds a kindred spirit in Quentin Beck better known as Mysterio. Ok, Mysterio (played by Jake Gyllenhaal) is a name that, ironically, Peter gives him. Seems Beck is a man claiming to be from another dimension that was created when Thanos snapped his fingers. Nick Fury (Samuel L. Jackson) asks Peter to help them stop these creatures from destroying the world.

The movie does an amazing job of subverting expectations and there’s a lot of things I’d like to talk about, but I don’t want to give away any of the major spoilers because there are some great twists and turns in this movie that will keep long time Spider-Man fans and fans of the movies guessing throughout.  Gyllenhaal gives one of the best performances of his career here and director Jon Watts absolutely delivers here.

How does Marvel find these guys, I mean this guy’s claim to fame is worked for The Onion! Damn, I wish I took that job back in the day. Little known fact I knew the guys who started the Onion and went to college with some of their earliest staff and they asked me to write for them, but I wasn’t funny and didn’t take them up on it. Damn, where would I be today if I went and did it? Anyway, this guy worked for The Onion! Sheesh.

Again, I was not looking forward to seeing this because Homecoming and the way Peter has been treated in MCU has really disappointed me.

There’s not a beat in this film that doesn’t land and isn’t flawlessly executed, the climatic fight sequence is something that I never thought I’d see on the big screen and it was a glorious thing to experience and even after all of that. The post credit scene, is game changing. While it felt like it came out of left field it utterly blew my mind.

I may have to do a spoiler filled version of this review because there are a bunch of things that I really want to talk about, but I think this is a movie that the audience deserves to see as cold as possible.