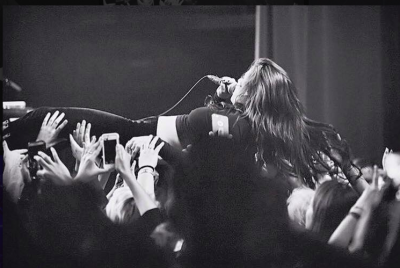 Believe it or not I was hit by a fire truck last week. A FIRE TRUCK. Unbelievable! So I’m a little late with this, if you are one of those folks staying in the DMV for Thanksgiving and looking for something to do. The female front Rock Band Kitten is playing at the Songbyrd Music House Nov, 22nd. Doors open at 7pm and tickets are only $12. I’m really digging their music. It’s kind of a house, electronic, dance vibe.  Check them out on Spotify.  They have 4 albums up and I’m really feeling Cathedral, especially the title track.

Growing up in LA, KITTEN’s Chloe Chaidez never learned about limitations in her life, only possibilities.  In fact, in her childhood it wasn’t even a question of whether she could be a Rock Star when she grew up… it was more of a choice of whether she wanted that or to be an Olympic Gymnast.

Upon first look at the diminutive Chaidez, you wouldn’t envision back flips off the stage and the laying bare of emotion in raw, rock and roll. Her youth belies her musical influences, which include 80s New Wave and 90’s Britpop – music that came out mostly before she was even born.

Moving to New York City upped the stakes for Chaidez.  She busks in Union Square and lives in Brooklyn, testing her material on a tough crowd – New Yorkers in the downtown mecca for protest.  Getting people to focus on what she was singing there was the best endorsement possible for her anthemic songs.

There are two levels in which you can appreciate Chaidez’ music.  The music is sublime, but the lyrics are where her intentions are truly revealed.  “I used to be afraid of expressing myself directly through the band’s lyrical content. But I’ve been through a lot over the past couple of years, and you’re gonna hear about it in this new record.”

Joining forces with young, talented musicians she has assembled for her band, Chaidez is extremely enthusiastic about going on tour.  KITTEN is ready to blow your minds on the road and on their upcoming release.