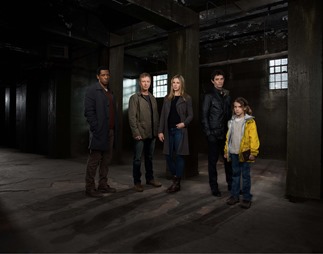 From writer and executive producer Glen Morgan (The X-Files), Intruders is about a secret society devoted to chasing immortality by seeking refuge in the bodies of others. A contemporary, chilling, paranormal tale set in the moody Pacific Northwest, the eight part series spins a fascinating and complex web of drama. As strange, apparently unrelated events start happening, multiple story-lines – a missing wife, an assassin covering his crimes, a child on the run – begin to intertwine to reveal a conspiracy that will forever change our understanding of human nature. Produced by BBC Worldwide Productions, the series is based on British novelist Michael Marshall Smith’s ‘The Intruders’. Intruders premieres Saturday, August 23, 10:00pm ET.

Jack Whelan (John Simm), a former LAPD cop with a troubled and violent history, finds the quiet idyllic life he has crafted with his wife, Amy (Mira Sorvino), shattered when she vanishes. Jack is drawn deeper into the mystery when his high school friend, Gary Fischer (Tory Kittles), shows up on his doorstep asking for help with a murder case. Initially dismissive of Gary’s claims, the more Jack investigates the more complex and surreal his discoveries become. What Jack uncovers leads him down the dark path of his own past and closer to the terrifying revelations about a secret society known as Qui Reverti.

In order to conceal the truth, an assassin named Richard Shepherd (James Frain) is embarking on a series of lethal executions and is in pursuit of a seemingly innocent nine-year-old girl, Madison (Millie Brown) – a runaway with a score to settle who could be the end of them all.

With Gary’s help, Jack is determined to find and save the wife he loves, at any cost…

“Because in the beginning, there was death.”

Simm previously starred in the hit BBC AMERICA series Life on Mars, State of Play and Doctor Who. He is joined by Sorvino, whose multi-award winning body of work includes Mighty Aphrodite, Norma Jean & Marilyn and Human Trafficking. BBC AMERICA welcomes James Frain (The White Queen, Tron: Legacy, True Blood) and Tory Kittles (True Detective) to the channel, and 10-year-old Millie Brown (Once Upon a Time in Wonderland), making her debut in a series lead role.

Under the direction of Eduardo Sanchez (The Blair Witch Project, Exists) and Daniel Stamm (13 Sins, The Last Exorcism), the creative team includes acclaimed production designer Mark Freeborn (Breaking Bad), and the series has music by Bear McCreary (The Walking Dead). The series is executive produced by Jane Tranter (Criminal Justice, Getting On, Da Vinci’s Demons) and Julie Gardner (Getting On, Doctor Who, Torchwood) for BBC Worldwide Productions, Glen Morgan and Rose Lam (The L Word). BBC Worldwide distribute the series internationally.

Intruders is part of BBC AMERICA’s slate of dramas including original series Orphan Black, The Game, A Poet in New York, Jonathan Strange and Mr Norrell, Ripper Street, In The Flesh, Atlantis, and Doctor Who. 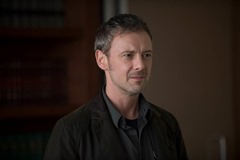 Former LAPD cop, Jack has now retired to a quiet life after a disturbingly violent incident. He lives with his loving wife, Amy, in a remote part of Washington State, forging a new life as a writer. When Amy vanishes and then unexpectedly reappears, she begins to behave unusually. As Jack’s fears for his wife increase, it appears that their life is not what it seems as both their pasts comes back to haunt him. Meanwhile, an old high school friend resurfaces in Jack’s life with news about Amy’s involvement in a wider conspiracy. Jack’s love for his wife drives him on a quest to save her from forces that threaten to overwhelm them both. 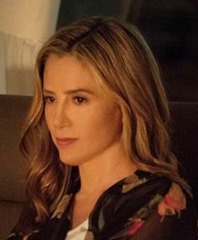 Amy is a lawyer at a Seattle law firm and has been happily married to Jack for over 10 years, seeing him through his difficult past into a new life. She abruptly vanishes without warning and just as abruptly reappears. It’s quickly clear that her behavior is increasingly out of character and erratic.  As Jack’s concerns grow, Amy continues to pull away from him, seemingly driven by her own agenda. With their marriage unraveling, the past threatens to engulf Amy and take her from Jack forever. 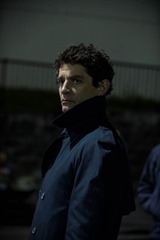 Ruthless and motivated, Richard is one of Qui Reverti’s most trusted Shepherds.  As a calculating killer, Richard carefully assesses risk. However, it seems a deal he made a decade ago could prove to be much more dangerous than he had anticipated. As old scores resurface to be settled and power shifts within Qui Reverti, Richard must focus on silencing those who pose a threat and securing his own position. 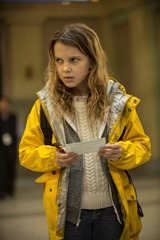 Nine-year-old Madison is disturbed by strange nightmares and agonizing headaches after her encounter with an unsettling stranger on a beach. Her behavior sometimes seems less than childlike. When she inexplicably runs away from home her distraught parents bring in the police who launch a major hunt to locate her. Headed to Seattle to settle an old score she never knew she had, Madison finds an old guidebook, an envelope of cash and a mysterious key supposed to help her on her journey, though she struggles to remember their significance. Torn between wanting to return home and press on with her mission, Madison’s behavior becomes increasingly erratic, unrecognizable and dangerous. 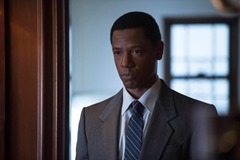 An old school friend of Jack’s, Gary reappears just as Jack’s seemingly quiet life begins to unravel.  A lawyer by profession, Gary exhibits unusual interest in the recent murder of a scientist’s family. It becomes apparent that Gary’s reappearance in Jack’s life is no coincidence as he claims compromising knowledge about Amy that Jack refuses to accept. Joining forces to investigate Amy’s disappearance, the unfolding information suggests a deeper conspiracy. As they get closer to the truth, Gary’s state of mind becomes increasingly disturbed and he is forced to admit to Jack he knows more about Qui Reverti than he had previously revealed.

Episode One – She Was Provisional

Mysteries unfold as Amy heads to Seattle on business and vanishes; Jack goes to Seattle only to uncover more unanswered questions about Amy’s whereabouts; an old friend visits Jack and asks for his help. Meanwhile, nine-year-old Madison starts behaving erratically after seeing a stranger on the beach. An assassin desperately tries to stop his secret from leaking. Episode One premieres Saturday, August 23, 10:00pm ET.

Episode Two – And Here…You Must Listen

Jack desperately tries to find Amy in Seattle but her movements offer more questions than answers; Madison finds herself in a train station with a ticket to Seattle, an envelope of cash, and a mysterious key. An act of humanity has serious consequences for Richard.  Episode Two premieres Saturday, August 30, 10:00pm ET.

Jack returns home to find Amy sleeping soundly in bed. She has a logical explanation for her whereabouts in Seattle and professes her love to Jack only to ask for a separation the next day. Jack is terrified for Amy’s mental state.  Meanwhile, Gary calls with alarming news.  Things get dangerous as Madison hitches a ride to Seattle, determined to evade capture. A deal from Richard’s past continues to haunt him. Episode Three premieres Saturday, September 6, 10:00pm ET.

Gary reveals a strange link between his former client and Amy. But just as Jack and Gary start to put the pieces together, their only reliable source is brutally murdered. Meanwhile, Madison arrives in Seattle and threatens an old acquaintance. Richard attempts to conceal his secret continues while handling rising pressure from Rose. Episode Four premieres Saturday, September 13, 10:00pm ET.

BBC AMERICA delivers U.S. audiences high-quality, innovative and intelligent programming. Established in 1998, it has been the launch pad for talent embraced by American mainstream pop culture, including Ricky Gervais, Gordon Ramsay, Graham Norton, and successful programming formats including ground-breaking non-scripted television like Top Gear and top-rated science-fiction like Doctor Who. Owned by BBC Worldwide, the commercial arm of the BBC, BBC AMERICA has attracted both critical acclaim and major awards including two Emmy® Awards, five Golden Globes® and eleven Peabody Awards. The channel attracts one of cable’s most affluent and educated audiences and is available on cable and satellite TV in 80 million homes. It broadcasts in both standard and high-definition, with content available On Demand across all major digital platforms. Online, www.bbcamerica.com is the place to go to dig deeper into pop culture with a British twist. Follow us on www.twitter.com/bbcamerica.

BBC Worldwide Productions is a key business under BBC Worldwide North America, the U.S. division of the main commercial arm and wholly-owned subsidiary of the British Broadcasting Corporation (BBC), BBC Worldwide. Led by Jane Tranter, BBC Worldwide Productions is based in Los Angeles and develops and produces scripted and non-scripted projects for U.S. cable and broadcast networks, as well as digital platforms. The production company is responsible for various titles including the upcoming Criminal Justice (HBO) and Intruders (BBC AMERICA) as well as Getting On (HBO), Americans in Bed (HBO), Top Gear (HISTORY), What Not to Wear (TLC) and the cultural phenomenon, Dancing with the Stars (ABC).