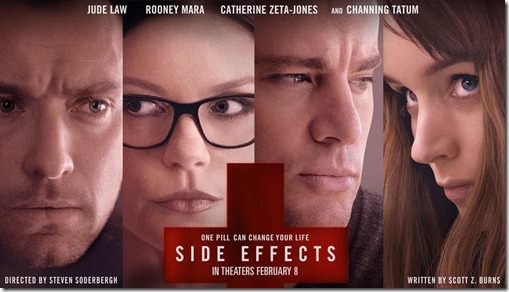 Emily Taylor (Rooney Mara) is a depressed young woman whose husband, Martin (Channing Tatum), has just gotten out of prison after going away for four years for insider trading. After a suicide attempt, she is taken to hospital where she encounter psychiatrist Jonathan Banks (Jude Law), who releases her on condition that she see him treatment.

In the course of his due diligence, he speaks with her former psychiatrist, Dr. Victoria Seibert (Catherine Zeta-Jones), who suggests he prescribe a relatively new drug, Ablixa, for her depression. The drug appears to do wonders for her, but one of side effects turns out to be sleepwalking and during an episode, she kills her husband. This is not a spoiler – we see a brief sequence at the beginning of the film that suggests as much.

During Side Effects’ first act, there is much play on how prevalent the use of antidepressants is – Emily’s boss (Polly Draper), for example, is neither surprised nor disappointed when she dashes from her desk to the women’s room, weeping. Her reaction is simply that she knows how depression feels and talks about how drugs helped her. Banks gives his wife a prescription med to help her with a big job interview. Even the wife (Mamie Gummer) of a former partner of Martin’s (David Costabile) is quick to understand Emily’s episode at a party – and to admit to being medicated.

After the murder, however, the film’s focus shifts to Banks and the way his life falls apart as a result of patient committing murder while under his treatment. Now we follow him as he tries to figure out what, exactly happened – and why. Almost anything I could say from this point on would be too much.

Like many of Soderbergh’s movie, Side Effects is fairly littered with terrific actors – each giving terrific performances even if they only have three or four lines. Tatum is extremely good as Martin – a performance as nuanced and complex as his lead in Magic Mike. Mara is devastating as Emily – almost more devastating than Ann Dowd as Martin’s mother. Zeta-Jones deftly takes her ice goddess-type and hangs it on its ear.

But it’s Jude Law who makes this film work. At first, Jonathan Banks (sharing the name of the versatile character actor who most recently played Mike on Breaking Bad – a coincidence? I think not…) seems like a caring, engaged doctor but, when we see him become involved for a drug trial (for which he is paid by the drug’s manufacturer), he begins to seem a bit weaselly. Then, when his life begins to fall part, we have to begin to sympathize with him – and we do.

The script, by Scott Z. Burns (who also wrote Soderbergh’s last film, the underrated Contagion) is taut and twisty – turning back on itself in intriguing, almost hypnotic, ways. The cinematography, by Soderbergh (as his alter ego, Peter Andrews)), is crisp and deceptive in its apparent clarity.

Even Thomas Newman’s score is sneaky smart and subtle – there’s one theme, for example, that seems to be a cue indicating insanity that has an unexpected reprise at a key moment, later.

Soderbergh’s direction is as crisp as his cinematography. Like a master illusionist, he shows us what’s happening – even invites us to look closely – yet never lets us see anything that might give away the film’s twists. Yet he plays fair at the same time, seeding the film with moments that make complete sense once the film reaches its conclusion.

Side Effects is the first really good film of 2013 and its only major side effect is entertainment.