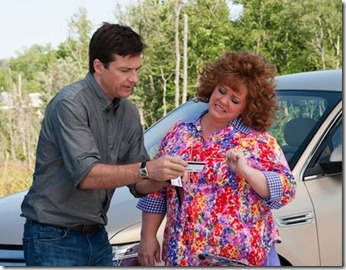 Identity Theft takes a comedic look at one of the most frightening possibilities of the computer age. While it’s an odd choice of subject for a movie, let alone a comedy, the combination of the straight man’s straight man, Jason Bateman, with one of the hotter comedic talents in recent years, Melissa McCarthy, is inspired – despite the movie suffering from wildly disparate tones and uneven pacing.

When Sandy Bigelow Patterson (Bateman) gives his details to a supposed service for free protection against identity theft, he becomes the victim of identity theft. The first he learns of it is when his credit card is refused when he tries fill up his car at a gas station. Then things escalate when he is arrested for missing a court appearance in Florida (he lives in Colorado and has never been to Florida). A quick fax of the felon’s photo clears up confusion in Colorado, but complications ensue that threaten Sandy’s high-paying new job, so he sets out to bring Sandy MkII to justice.

McCarthy, of course, plays the felon – who has more names than birthdays (a drawer in her home contains dozens of driver’s licences, each with a different identity). She’s also a good deal tougher to drag back to Colorado than Sandy expects.

While a movie generally has a three-act structure, Identity Theft squeezes several different tones into the proceedings.

First, the movie has a sweet tone as we meet Sandy, his wife (Amanda Peet) and family and the asshat who is his boss (Jon Favreau). Then the movie goes really dark just as Sandy leaves his job to take a new position with a start-up financial services firm and his life falls apart in an instant.

Finally, the movie moves into comedy high gear when Sandy reaches Florida and tries to nab Sandy II. Here, the movie goes for the slapstick gusto – though darkness intrudes again when we learn that Sandy II is the target of a couple of hitpersons (Genesis Rodriguez, T.I.) on orders from an imprisoned crime boss she humiliated (Jonathan Banks, Breaking Bad), and a skip tracer/survivalist (Robert Patrick).

From there, it turns into a road trip movie, with Diana (her preferred name) and Sandy having to improvise constantly, before the expected (but far too sudden and completely unearned) shift in her character. At which point Identity Theft gets maudlin for a bit before Diana regains her edge and still manages to win Sandy over. When the tone of the movie changes, the paces also changes. The set-up seems to plod along, as does the maudlin section near the end – before the edgy comedy really kicks in and things pick up speed. Director Seth Gordon (Horrible Bosses) seems unsure about where the movie is going – and how to get it there.

Identity Theft may not nearly as funny (or touching) as Bridesmaids, but once it gets going (and it does takes too long to get going), it’s very funny – before going maudlin with that 180 character shift that isn’t earned. Once it gets past the maudlin bit, it kicks in with a pretty satisfying conclusion that is far more earned than the character shift that sets it up.

Melissa McCarty is very funny and can be believable as a character who evolves, but even she can’t pull off such a sudden change. Jason Bateman is the best straight man in film today – and can get laughs simply by being the straight man. He carries the film through its soft spots and makes it sing when it is working.

Most of the secondary characters are given nothing to work with, but T.I. and Genesis Rodriguez are fun as the gangsters who are chasing McCarthy’s Diana – I’d love to see a movie about those characters (and their hardass boss). Amanda Peet – an extraordinarily funny actor – and Eric Stonestreet (Modern Family) are completely wasted.

Some judicious pruning in the first act, a more believable evolution for Diana, consistent pacing and a bit more depth for a few more secondary characters would make Identity Theft a terrific comedy. As it is, it’s still fun in spite of its fluctuating pace and conflicting tonal shifts.