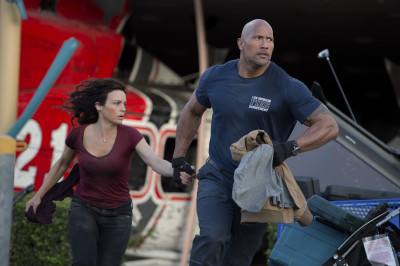 What could bring a broken family back together? The mother of all earthquakes, a tsunami and a bit of luck. No, really.

And, though more than a little cheesy, it works gloriously!

Irwin Allen would be proud (before Roland Emmerich, there was Irwin Allen – the original Master of Disaster: Voyage to the Bottom of the Sea, The Towering Inferno, The Poseidon Adventure). He would have absolutely loved the concept: when a family breaks apart, the biggest earthquake in history reunites them.

San Andreas opens with an LA Fire & Rescue helicopter crew saving a young woman after her car plunges off the highway and is wedged between rocks part way down a cliff – led by a very matter of fact Ray (Dwayne Johnson). Well, matter of fact until a shift causes a problem for the junior member of the team and he has to rappel in.

Afterward, Ray heads home to pack a bag for when he takes his daughter, Blake (Alexandra Daddario, True Detective, the Percy Jackson movies) to college the next day. An envelope in the day’s mail brings sad tidings – divorce papers.

Things are even worse than he thought – his ex, Emma (Carla Gugino) and Blake have just moved in with her boyfriend, a charming British architect called Daniel (Ioan Gruffudd). Even worse than that, Ray’s road trip with Blake is canceled by an earthquake and he has to get right back to work.

In the meantime, at Hoover Dam, Lawrence (Paul Giamatti) and Kim (Will Yun Lee) are testing what they hope will be a way to predict earthquakes when a massive quake occurs – seconds after their program had predicted it. The dam is reduced to rubble and Kim dies.

Back at Caltech, Lawrence discovers that things are about to get much, much worse – and by pure chance, TV reporter Serena (Archie Panjabi) is there for an interview. To say she gets a much bigger story would be the understatement of the century.

Meanwhile, Daniel is driving Blake to school – with a brief work meeting in San Francisco on the way – when the next massive quake hits, trapping his car and Blake in an underground parking lot. He goes for help but, after a second quake, runs for his life. It’s only through chance that two British brothers – Ben (Hugh Johnstone-Burt) and Ollie (Art Parkinson) – that she’d spoken with while Daniel was off to his meeting, are around to get her out of her predicament. 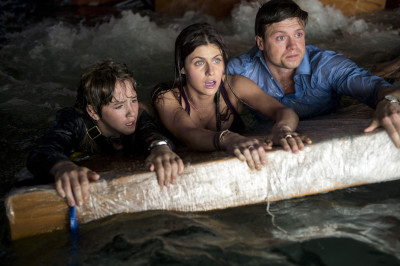 At the same time, Emma is having lunch with Daniel’s ‘over protective’ sister (Kylie Minogue). When the wake hits, she calls Ray who deviates from his job rescuing people to rescue her. Then the two of them set out to rescue Blake. From there, it’s all about Mother Nature trying to keep these two crazy middle-aged kids from saving their daughter – and towns, cities and large chunks of countryside falling down, splitting apart and generally wreaking havoc on the people of California.

Written by Carlton Cuse, San Andreas is a big, over the top production that is centered on a small, human story. Each of the handful of major characters – Emma, Blake, Ben, Ollie and Lawrence – get their great lines and opportunities to shine in the chaos. But make no mistake, this is a Dwayne Johnson showcase.

Frankly, San Andreas is well aged cheddar – all the clichés you expect (and want, let’s be honest); delivered by actors who can say their lines without getting ironic; all the big, loud effects, and all the emphatic background music cues (wrapped around a few tunes that might feel vaguely familiar even if you don’t listen to a lot of radio) that give every scene just that little extra bit of pop.

Then there are those moments that catch you off guard because they’ve snuck in moments of wit and intelligence between the clichés – like having Blake be a smart, resourceful young woman who repays Ben and Ollie by helping them keep (relatively) safe; or having Emma be the strong, together kind of woman who would be a match for Ray in a relationship – and the relationship ending because he was the one who couldn’t deal with an earlier tragedy).

It also helps that the cast is having as much as we are – check out Parkinson’s cheeky, scene-stealing Ollie for a master class on sneaky smart, as just one example. 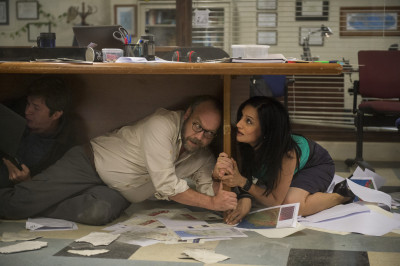 Johnson, of course, is the centerpiece here. Ray is smart, funny, affable, likeable – and doesn’t take himself too seriously. Johnson does a terrific job of making seem like just a guy while he’s being a hero. His screen presence is even bigger than he is, so it would so easy for him to play things bigger but he’s smart enough to know he doesn’t have to.

The effects are even bigger than Johnson’s screen presence – and they are (mostly) so good that it’s hard to tell when we shift from real to CG (of course are times when it isn’t, but they are few and far between – and never enough to take out of the movie).

Brad Peyton (Journey 2: The Mysterious Island) makes quite a leap here. Working with an even more impressive cast a bigger budget and much bigger (and more plentiful) effects, he ties everything together nicely. He balances Johnson’s general restraint with Giamatti’s more florid performance while keeping the family dynamic between Ray, Emma and Blake feeling special – and letting Johnstone-Burt, Parkinson and Panjabi remain relatively naturalistic.

He also paces the film at the ‘bat out of hell’ frequency. What might have been a two-and-a-half-hour monstrosity comes in at well under two hours. Peyton never lets up and never really lets us catch our breath, so when we come out of the theater, we feel like we’ve been on a real adventure.

San Andreas is close to a perfect summer blockbuster – it’s a great ride while we’re there, but, like cotton candy, it’s gone almost as soon as we leave the theater – leaving behind just a ghostly hint of sweetness behind.