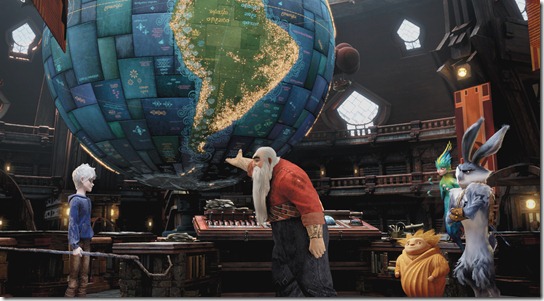 When The Boogeyman, Pitch Black (voiced by Jude Law), decides he wants to takeover kids’ dreams and destroy their belief in childhood icons like Santa/North (Alec Baldwin), The Sandman, the Easter Bunny (Hugh Jackman) and the Tooth Fairy (Isla Fisher), the Man in the Moon (or Manny as he’s referred to) drafts the mischievous Jack Frost (Chris Pine) to help the four Guardians save the children’s dreams.

Although the basic plot is pretty simple, Rise of the Guardians works because it doesn’t just throw fabled characters together in a strange battle for childhood innocence, it gives our much loved characters backstories – and purpose. The key is that these character stories unfold as the movie progresses – with its characters interacting like regular people (Jack and Bunny, for example, seem to rub each other the wrong way from the start, while pretty much everyone loves Sandy).

Then there’s the way that some characters embrace responsibility (like North) and others (Jack) are driven by a sense of fun and mischief – and the genuinely scary way that Pitch plans his conquest (by turning children’s dreams to nightmares). There’s also Bunny’s refusal to accept change (he can’t believe that Manny would actually call Jack to be a Guardian, for example), and the surprising purpose behind Tooth’s collection of children’s teeth (a purpose that plays into Jack’s backstory in a dramatic fashion). 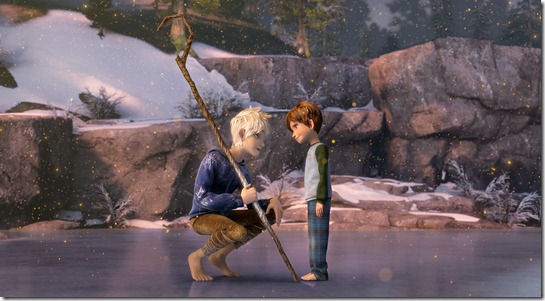 Adapted from a children’s book by William Joyce, David Lindsay-Abaire’s script has more depth than the trailers suggest and Peter Ramsey’s direction folds the characters moments neatly into the action. By the time the opening sequence is over, for instance, we know exactly who Jack Frost is – but one of the joys of the film is that we only find out who he was when he does.

The voice cast is superb, too. One might suspect that Pine and Jackman were in the recording booth together – their dialogue absolutely crackles with energy. Baldwin gives North that balance between fun and seriousness that we expect from someone who keeps a list of who’s naughty or nice, and Fisher is unexpectedly haunting as Tooth. Sandy never speaks, but he has a unique way of communicating that deserves to be seen, not described.

Rise of the Guardians is also extremely lovely to look at – the production design is amazing – and the 3D is used both to startle (as when North’s sleigh dashes toward the audience) and build the movie’s world (Tooth’s home, for example, is spectacular). DreamWorks Animation continues to do a terrific job – the animation is right up there on a level with Pixar – and overall, Rise of the Guardians is a better film than Pixar’s Brave.