For a movie about the then fastest man alive, Race certainly takes its time – the story of how Jesse Owens became the winner of four gold medals at the Berlin Olympics of 1936 makes up its more dawdling sections with unexpected (frequently truth is stranger than fiction) details and a strong performance by Stephan James.

While Owens’ story hits a lot of familiar sports movie beats, the moments of pure truth that require those beats overcome the movie’s moments of familiarity.

Race has to operate on a few different levels: the talented kid making it big (with a few equally big mistakes along the way); the racial realities of the period – when Owens wonders if, deep down, there might be a striking similarity between Nazi Germany and the U.S. on some level; the pure joy – and freedom – of sports.

The movie follows Owens from the moment he sets out for Ohio State – a school whose track team is something of a joke – because he’s been told the school’s coach, Larry Snyder (Jason Sudeikis) is the best. He leaves his families – his parents, his girlfriend and their daughter – in the hope of being an Olympic athlete.

Here is where details begin to add a depth to the film that help overcome its pacing problems – the Greyhound bus Owens takes has a sign about two-thirds of the way to the back that reads: Colored Seats (or words to that effect). Another moment finds Owens and his best friend and teammate, Dave Albritton, being kept out of the showers until after the white guys on the football team use them – in a rush, there follows a flurry of racial epithets. It’s a moment that isn’t repeated because, well, the point has been made and adds a layer to the movie that remains throughout.

Although some of the dialogue can be clunky, James’ earnest, nuanced performance keeps it feeling real – even when he visits a German competitor, Carl ‘Luz’ Long, the European champion (a friendship that is both unexpected and historically accurate, and lasted until Long’s death in World War II).

We see Avery Brundage (Jeremy Irons) insist that sports should never be political and then go out and play politician to persuade Nazi second-in-command Joseph Goebbels (Barnaby Metschurat) to at least keep the Nazi hatred of Jews under wraps until after the games – after persuading the American Olympic committee not to boycott. Irons is crisp and sharp in the role, while Metschurat’s Goebbels is utterly abhorrent.

For me, the real surprise is Sudeikis. He does, as expected, handle Snyder’s wiseacre side beautifully, but also has some very nice dramatic moments – as when he goes in search of the shoe factory from which he had ordered new shoes for Owens. 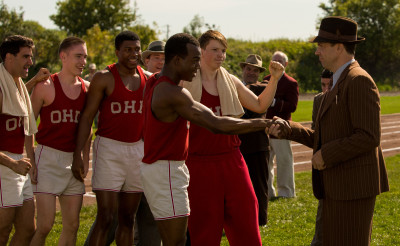 Game of Thrones’ Carice Van Houten is also excellent as Leni Reifenstahl, who is admired for her filmmaking skills and detested as a Nazi propagandist. Here, she’s shown as being not the least bit intimidated by Goebbels and shooting the games for a propaganda film in exactly the way she wanted (and capturing Owens’ feats forever).

Other details that make Race memorable include the Fuhrer leaving early so he wouldn’t have to congratulate Owens on his victories, and a chiron before the closing credits that notes that FDR never acknowledged Owens’ achievements either.

The script, by Joe Shrapnel (Frankie and Alice) and Anna Waterhouse (Frankie and Alice), is filled with other details and a good deal of clunky, or too on-the-nose dialogue and director Stephen Hopkins (House of Lies, Thorne: Sleepyhead) never quite gets it under control. At 134 minutes, it just a tad bit too long.

For someone who’s shot a lot of TV comedy, he seems to have forgotten that brevity is soul of wit and discretion is the better part of valor. When working with sequences that revolve around Owens’ achievements, he picks up the pace very well, but too much of the rest of the movie relies on its cast’s not inconsiderable talent to carry it through the slow patches.

Fortunately for him, and for us, his cast is up to the challenge – especially African-Canadian James (yet another graduate of the DeGrassi School of Acting), who makes Owens thoroughly relatable and human despite his herculean feats of athleticism.

In the end, this may not quite be the movie that Jesse Owens deserves, but he’s not poorly served by it either.