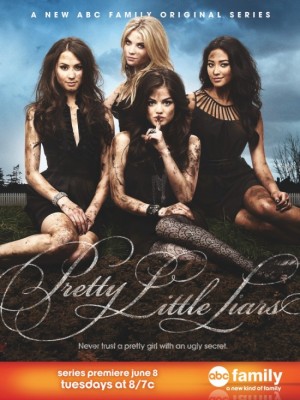 While all the broadcast networks fall all over themselves to produce the same type of shows in three over used genres – Procedurals, Hospital and Cops, I have to turn to the Cable Networks to get some variety. ABC Family has an interesting new show called Pretty Little Liars which is basically a rip off of Gossip Girl only these girls are somehow involved in the murder of one of their own.  A year has passed since one of their own went missing; now the remaining girls are receiving text messages from the dead girl.

The premiere episode does enough to get you interested in where it all going to lead, but the primary characters, Aria (Lucy Hale), Spencer (Troian Avery Bellisario), Hannah (Ashley Benson), and Emily (Shay Mitchell) are really generic and look essentially the same.  None of these girls seem to be someone that any normal person can relate to and the show’s advertisement keeps stressing the point that “You should never trust Pretty Girls,” so it seems clear that we’re supposed to hate these girls. If that’s the case it’s going to be hard to convince people to continue to watch a show where every character is going to end up being hateful and unsympathetic.  I already hate the dead girl and the new girl who is a pothead.

Also, the show clearly thinks it’s ok for older men to sleep with teenage girls. As it seems like the show is already setting it up so that NO man can resist the charms of a pretty 16 year old that act like they are 30.

We’re supposed to wonder if their friend is really dead or not. But clearly since the police found the body at the end of the first episode, it’s probably someone who has her diary.  We already have one of them sleeping with a teacher and a mom sleeping with a cop so her daughter’s shoplifting record gets cleaned up. The text messaging from the dead girl gimmick is already tired. I get enough of that annoyance on Gossip Girl.

The problem with high concept shows like this is, the central mystery has a tendency to drag on forever or there’s nowhere for it to go after the mystery is solved. I’m a sucker for these kinds of shows so I’ll give it another three episodes to see where it all leads.  Pretty Little Liars airs on ABC Family Tuesdays at 8pm.