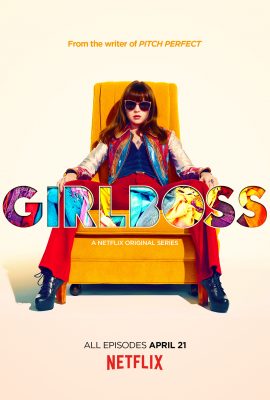 ‘You know how people flip houses? Well I flip clothes.’

That’s Sophia Amoruso explaining what she does to a potential investor.

Amoruso began selling vintage clothes and built the multi-million dollar fashion empire, Nasty Gal, by the time she was 27.

Netflix’s Girlboss, from Pitch Perfect writer Kay Cannon, is inspired by the book #Girlboss by Amoruso and stars Britt Robertson in the lead role.

Make your own rules.

Check out the official trailer for Girlboss, premiering on Netflix Friday, April 21.

About Girlboss:
Girlboss is inspired by the New York Times best-selling book #Girlboss by Sophia Amoruso, founder of the fashion brand Nasty Gal. The series centers on Amoruso (Britt Robertson), who began selling vintage clothes on eBay and, by the age of 27, had built the multi-million dollar fashion empire, Nasty Gal.

Girlboss is created by and executive produced by Kay Cannon (Pitch Perfect 1& 2, 30 Rock), who also serves as showrunner. Charlize Theron (Monster, Young Adult), Laverne McKinnon and Beth Kono of Denver & Delilah, Christian Ditter (How to Be Single) and Sophia Amoruso will also serve as executive producers. This is a Netflix production and there will be 13-half hour episodes.