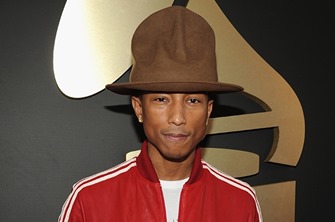 Pharrell Williams was more than a presence at the 2014 Grammys and now it has been announced that he will perform his Oscar®-nominated song, Happy, on the Oscars®. One can only hope he chooses more appropriate headgear.

“Happy,” which Williams wrote and produced for “Despicable Me 2,” is nominated for Original Song. The three other nominated songs are “Ordinary Love” from “Mandela: Long Walk to Freedom,” “Let It Go” from “Frozen” and “The Moon Song” from “Her.”

Pharrell Williams has won seven Grammy Awards®, two (in 2004 and 2014) for Producer of the Year. Named Billboard’s Producer of the Decade in 2010, his productions have sold over 100 million copies. Williams collaborated on two of 2013’s most ubiquitous anthems: Robin Thicke’s “Blurred Lines,” which he co-wrote and produced, and Daft Punk’s “Get Lucky,” which he co-wrote and also sang. As a solo producer and as part of the prolific producing team The Neptunes, Williams has played a key role in creating a string of hits over more than two decades, including Jay-Z’s “I Just Wanna Love U (Give it 2 Me),” Nelly’s “Hot in Herre,” Gwen Stefani’s “Hollaback Girl,” Snoop Dogg’s “Drop it Like it’s Hot,” Britney Spears’ “I’m A Slave 4 U” and Justin Timberlake’s “Like I Love You.”

Awards for outstanding film achievements of 2013 will be presented on Oscar Sunday, March 2, 2014, at the Dolby Theatre® at Hollywood & Highland Center® and televised live on the ABC Television Network. The Oscars, produced by Craig Zadan and Neil Meron, also will be televised live in more than 225 countries and territories worldwide.