It’s ten years after the interdimensional breach that spewed forth kaiju has been breached. Though there have been no incursions in that time, Jaeger pilots are still being trained and the decimated fleet of kaiju has been at least partially rebuilt.

Jake Pentecost (John Boyega, Attack the Block and some space opera series) – the son of the heroic Stacker Pentecost who died saving the world – is a thief specializing in Jaeger parts from a Jaeger graveyard. He is not a hero – and refuses a request from his sister, Mako Mori (Rinko Kikuchi) to return to the PPCD. 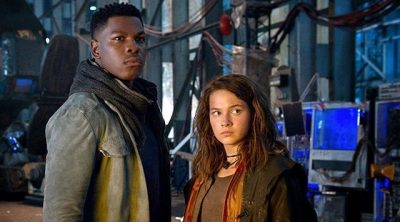 When a jaunt into the Jaeger graveyard goes awry – someone beats him the part he was after – his partners turn on him. Escaping them leads him to meeting Amara Namani (newcomer Cailee Spaeny), a teen genius who needs that part for her homemade Jaeger, Scrapper.

The Jaeger known as Gypsy Avenger – co-piloted by Nate Lambert (Scott Eastwood) – runs them down and hauls them to the Pan Pacific Defense Corps base in China. There the two are given the choice: jail or joining (or in Jake’s case, rejoining) the PPCD.

Meanwhile, Shao Industries’ CEO Liwen Shao (Tian Jing, Kong: Skull Island), is working on setting up a worldwide net of Jaeger drones that can be piloted remotely. A UN vote on whether to deploy them is about to take place when a rogue Jaeger attacks – hastening an approval after a key dissenter is killed in the attack.

And we haven’t gotten to the actual kaiju, yet (but they arrive, they’re something else again). 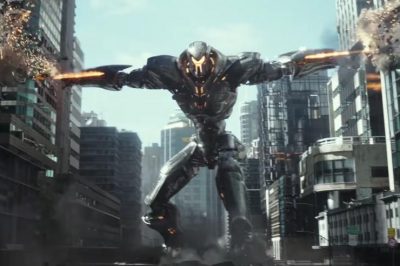 DeKnight worked on the Spartacus and Daredevil TV shows, so he is at home with the required CGI and they are pretty terrific. On an IMAX screen, they don’t feel artificial, and since the movie is in 3D, that’s important.

The 3D is generally extremely good – even during the fast-paced action sequences that are the bulk of the movie, there’s no significant blurring or murkiness. The careful amping up of certain specific bits provides some exhilarating moments.

Boyega and Eastwood are extremely good as former co-pilots who have to work together again. The cadets (Karan Brar, Wesley Wong, Ivanna Sackhno, Mackenyu, Lily Ji, Shyrley Rodriguez, Rahart Adams and Levi Meaden) aren’t given a lot of individual screen time but are pretty solid. Of them, Sackhno and Brar stand out.

Most of Pacific Rim: Uprising’s energy comes from Boyega and Spaeny – though Charlie Day and Burn Gorman (reprising their characters from the first film) add a certain weird, almost slapstick energy that keeps us interested during the science stuff.

Despite not being directed/co-written by Guillermo Del Toro, this is a decent kaiju vs mecha (monsters vs giant robots) movie. It’s slick and lean and undemanding fun.