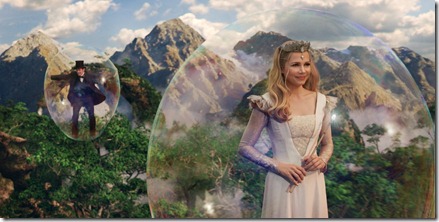 Oz the Great and Powerful is a magnificent tapestry of visual delights. Where it goes wrong, though, is at its heart – James Franco is simply not the right man for the role.

One of the problems with Oz the Great and Powerful (other than Franco, I mean) is that it tries too hard to echo the 1939 classic, The Wizard of Oz. I mean, it’s cool that the film opens in black and white, at a circus in Kansas and then shifts to color when Oz arrives in Oz. It’s cool that, like in the classic, there are Oz counterparts to Oz characters (Oz’s assistant Frank becomes his flying monkey assistant Finley; Annie, his Kansas sweetheart becomes Glinda; a girl in a wheelchair becomes China doll in Oz). 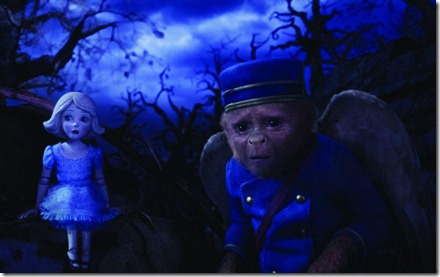 Where the film goes too far in its homages is little bits like Annie (Michelle Williams) being proposed to by John Gale (Dorothy’s last name in the Baum book and 1939 film), suggesting that she will become Dorothy’s mother – a parallel hammered home by the curiously familiar gingham dress (‘Nice dress. Is that gingham?’ asks Oz) Annie is wearing.

From the opening, we see that Oz has the potential to be a good man (he did win Annie’s heart) but also that he’s fighting that inclination – his philandering results in his having to escape the circus strongman in a hot air balloon (the vehicle that takes him into the tornado that takes him to Oz).

Oz is a wondrous place with incredibly vibrant flora and fauna – like river fairies (humanoid, intelligent piranha with wings) and flying monkeys. It is also home to the Emerald City, currently run by Evanora. Oz is led there by the pure-hearted, naïve (let’s go so far as to say gullible) Theodora (Mila Kunis), who jumps to so many conclusions, so quickly, that we never really get to know her before…

Anyroad, suffice to say that Oz is seen to be the great wizard who was prophesied would come and kill the Wicked Witch, freeing Oz from tyranny and becoming its new, wise king. Oz, greedy con man that he is, is swayed more by the kingdom’s treasure than Theodora’s beauty, and sets out, with finely, who has become his sworn servant (a cute sequence). 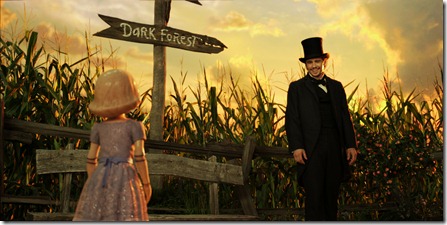 The two find a devastated town of teapots and find the injured China Doll, whom Oz patches up with some not-so-wizardly glue. China Doll persuades them to let her join them and they continue along – passing through the Dark Forest and coming upon Glinda the Good and learning of Evanora’s duplicity.

Glinda, though Good, is not naïve. Rather, she is uncommonly perceptive, which leads Oz into his transformation to the kind of person he really ought to be – and, perhaps, the kind of wizard they need.

Oz the Great and Powerful looks great and fully exploits its 3D technology. The script, by Mitchell Kapner and David Lindsay-Abaire, doesn’t really develop many of the characters, except Oz, in anything more than a desultory way, and occasionally takes too long to get where it’s going.

Director Sam Raimi seems finely attuned to details – and there is a lot of detail work in the movie – but oddly less so when it comes to most of his characters: Oz is the only one who has any kind of real journey. 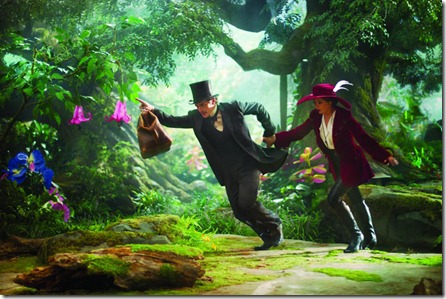 Performance-wise, even with their under-developed characters, many of the cast do terrific work. Weisz’s Evanora may be evil, but she attacks the role with great verve; Williams’ Glinda may mostly be an ethereal representation of good, but she gives her perceptivity a little sass. By comparison, Kunis, whom the camera absolutely adores, never quite masters her character’s scattered naiveté – or her eventual growth.

Zach Braff provides the film’s only real comic relief as Finley, the slightly acerbic flying monkey – but there’s nothing he can do as Oz’s hapless assistant in the circus – while most of the film’s heart comes from the mercurial China Doll. King fuels her progress from injured and helpless to tough, resourceful and just a bit manipulative with the lightest of touches.

Bill Cobbs makes an impression as the wise old Master Tinker, but Tony Cox is wasted as the humorless Knuck and a repetitive fanfare gag.

There are moments of great exhilaration here – like the ‘travel by bubble’ sequence, and the showdown between Glinda and Evanora – that perfectly capture what the film should have been. In fact, there are enough of them to make Oz the Great and Powerful worth seeing – especially in IMAX, where most every frame is like a fabulous fantasy painting.

In a way, though, in the end, to whatever extent that Oz the Great and Powerful works, it’s because of the earnestness and adroitness of everyone but Franco. It’s funny that, in the story of how Oz became the man behind the curtain, he’s the least interesting part of the story.