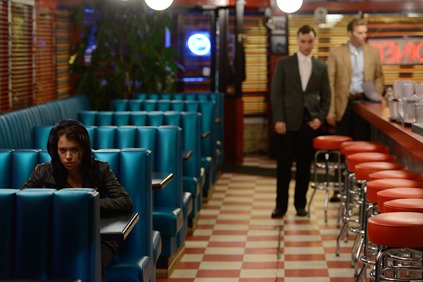 If you thought season one of Orphan Black (BBC America, Saturdays, 9/8C) was a fast-paced, thrilling mix of well-developed character and fast-paced action wrapped around an intriguing premise, you ain’t seen nothin’ yet!

After a quick previously on montage, the season two premiere of Orphan Black, Nature Under Constraint and Vexed, gets right into it as Sarah (Tatiana Maslany) frantically tries to call Felix (Jordon Gavaris) and seeks shelter from a downpour by slipping into a diner. When she can’t reach Felix, she tries Alison and Cosima (both also Maslany) but their numbers seem to be out of service. As a last resort, she tries Paul (Dylan Bruce) – only Rachel (Maslany again) answers. Two men enter the diner looking for her and violence ensues, forcing Sarah to think quickly, but leaving her once again running in the rain.

At this point, a quick recap: Sarah is one of a number of clones who have been living normal lives, until recently when someone began killing them. Sarah became aware of the other clones when she saw one of them commit suicide and, needing a way to hide, took her identity. This led her to meet uptight soccer mom Alison and university student Cosima – who brought her up to speed on the killings, though it took a while for them to trust her. It also caused complications because Beth, the suicidal clone had been a cop and her partner, Art (Kevin Hanchard) could see that something was different about her.

Sarah also reconnected with her young daughter, Kira (Skylar Wexlar) who was being fostered by Mrs. S. (Maria Doyle Kennedy). Through Cosima, the Clone Club learned that they had been created through the work of a Dr. Leekie and The Dyad Institute and Cosima began dating Delphine (Évelyne Brochu). Delphine seemed to turn on Leekie and his organization and began helping Cosima with her research into the clones’ genetic makeup – essential to find and combat a medical issue that was slowly killing Cosima and might eventually do the same to the other clones. 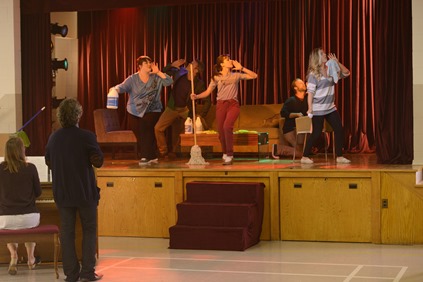 In the season one finale, Sarah had met yet another clone, Rachel, who threatened her daughter if she didn’t come along quietly, but Sarah fled. Unknown to her, Mrs. S. and Kira had apparently gone away. Cue the above teaser.

Nature Under Constraint and Vexed weaves yet another tangled web as Sarah invades The Dyad Institute in search of Kira; Alison turns out to know someone who specializes in extra-legal sales (drugs, guns…); Art gets even closer to finding out what’s going on with Sarah, and Felix goes from mid-party high to persuading Alison to visit the abovementioned dealer. Plus, Alison’s in a musical! It’s just community theater, but hey – it’s the lead!

One of the best things about Orphan Black is Maslany’s ability to play endless numbers of clones – each with their own distinct looks, accents, walks, attitudes, skills. Even better is when she plays one of the clones playing another one of the clones – her Sarah playing Alison and Alison playing Sarah were among the myriad highlights of season one. She gets to do that here in the season two premiere – quite possibly reinforcing the general unhappiness that she wasn’t at least nominated for an Emmy for season one.

Another thing that makes the series so wonderful is that it tackles issues ranging from family to the concept of ownership of DNA – and the concepts of individuality and difference/nature vs. nurture in the different clones (I know there’s a significant number of fans and critics who refer to them as The Orphans, but I prefer the Clone Club). 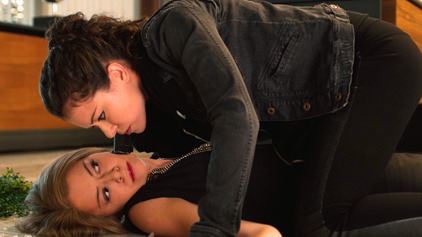 Nature Under Constraint and Vexed also brings back the religious zealots who were using their own clone, Helena, to kill the other clones (they see them as an abomination to be cleansed from the Earth), though in a somewhat different but no less lethal fashion. At the same time, we get a better idea of the kind of influence The Dyad Institute wields – and that’s scary stuff.

The season premiere was written by series co-creator Graeme Manson and directed by co-creator John Fawcett. It’s compelling stuff – a mix of character and action that never seems forced or fake. Maslany again plays multiple clones, making each distinctive – with a number of instances requiring two or more of them to be in the same scene.

Gavaris continues to steal every scene he’s in and he convincingly shows Felix to be capable of insight and intelligence – even when higher than a kite. The rest of the cast has to bring their A-game to keep the show on its brilliant course, so they do. Whether it’s Hanchard’s Art trying to figure out what’s going on; Bruce’s Paul walking that potentially fatal line between helping Sarah and keeping The Dyad happy, or Brochu walking a similar line between Cosima and The Dyad, the performances match the detail and intricacy of Manson’s writing.

Somehow, Fawcett keeps a multitude of balls in the air, giving the ep a balance between action and character – and frequently allowing action to develop character (Sarah confronting Rachel, for example). Though Maslany has received most of the plaudits for the series – and deservedly so – every aspect of Orphan Black is award-worthy. Last season, it may have flown under the wire, but if Nature Under Constraint and Vexed (love that title!) is any indication, the series is just hitting its stride.

If you thought season one was something, prepare to be amazed. Season two looks to be bigger, more complex and a whole lot more fun.