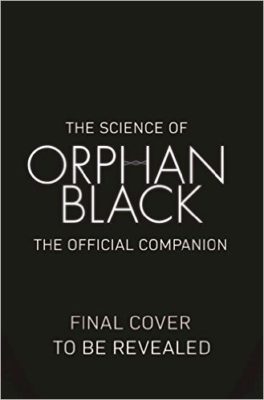 Television’s most entertainingly convoluted series is getting a companion volume from the publishers of such edifying and entertaining titles as Investigating Sherlock and The Doctors Are In.

The Science of Orphan Black – The Official Companion (placeholder cover above) will examine Orphan Black’s science from clones to epigentics; from the real diseases on which the sestras’ disease is based to the philosophies behind Neolution.

The Science of Orphan Black, by Casey Griffin and Nina Nesseth, with Graeme Manson (series co-creator) and Cosima Herter (science consultant) will be in stores on June, 2017.

Toronto (October 13, 2016) — Boat Rocker Brands and ECW are proud to announce the forthcoming publication of The Science of Orphan Black: The Official Companion by Casey Griffin and Nina Nesseth, with Graeme Manson and Cosima Herter, which will be released in June of 2017 to coincide with the series’ fifth and final season.

With exclusive insights from Graeme Manson, the Peabody-winning, cult favourite show co-creator, and science consultant, Cosima Herter, The Science of Orphan Black takes readers behind the closed doors of the Dyad Institute and inside Neolution. Penned by scientists Casey Griffin and Nina Nesseth, the book decodes the mysteries of Orphan Black — from the history of cloning, epigenetics, synthetic biology, chimerism, the real diseases on which the clone disease is based, and the transhumanist philosophies of Neolution, to what exactly happens when a projectile pencil is shot through a person’s eye and into their brain.

Title: The Science of Orphan Black

Casey Griffin is a graduate student pursuing her Ph.D. in developmental and stem-cell biology at the University of Southern California in Los Angeles. Nina Nesseth is a professional science communicator whose background is rooted in biomedical sciences and science communication, with special interest in human biology. She is a staff scientist at Science North in Sudbury, Ontario. Nina and Casey write for entertainment news site The Mary Sue, where they dissect the science of Orphan Black.

Sarah is an outsider, orphan and street-wise chameleon with a murky past and a tenuous future. When she witnesses the suicide of a stranger who looks just like her, she assumes “Beth’s” identity, planning to solve all her problems with a quick score. Instead, she stumbles into a kaleidoscopic mystery. The truth is they are clones. There are more out there – genetic identicals, planted in unsuspecting birth parents and nurtured in wildly different circumstances. Not knowing who created them or why, Sarah begins to uncover the insidious plan behind the clone experiment. She forges deep bonds with her identical “sestras”, an unusual family that has to dig into the past in order to discover their origin and the designs on their lives. Orphan Black is produced by Temple Street, a division of Boat Rocker Studios, and airs on Space and BBC AMERICA. It is distributed internationally by BBC Worldwide.

ECW Press has been recognized by Publishers Weekly as one of the most diversified independent publishers in North America. ECW has published close to 1,000 books that are distributed throughout the English-speaking world and translated into dozens of languages. In the next year, ECW will release 50+ new titles and will continue to support and promote a vibrant backlist that includes poetry and fiction, pop-culture and political analysis, sports books, biography, and travel guides. Books by writers whose names you know and love — and by those who we’re very pleased to introduce for the first time.