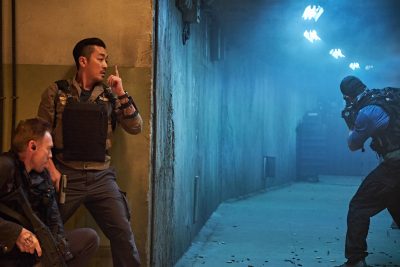 With a Korean and American cast that includes Ha Jung-woo, Jennifer Ehle and Malik Yoba, Take Point premieres in Los Angels and New York on December 27th before going wider in the US and Canada on January 4th. Check out the trailer below.

Los Angeles, CA (December 19, 2018) – South Korean director KIM Byung-woo known for his award-winning film “The Terror Live,” is back with the release of his new action thriller, “Take Point.” This title releases in Los Angeles on December 27 and in cities across the U.S. and Canada on January 4. It will have audiences at the edge of their seats as they follow Captain Ahab on a CIA mission that he may not get out of.

On the day of the U.S. presidential election in 2024, Captain Ahab (HA Jung-woo), who works for private military company Black Lizard, and his team of elite mercenaries embark on a secret CIA mission to abduct North Korea’s Armed Forces Minister in an underground bunker below the Korean Demilitarized Zone (DMZ). The mission derails when the target turns out to be none other than Supreme Leader of North Korea himself, who has an incredibly high bounty on his head. Ahab and his 12 men go in for the jackpot against the CIA’s wishes. Unbeknownst to them, another PMC squad is after the same target and Ahab has to work around CIA’s aerial strikes that put him and his men in immediate and present danger. The bunker is demolished and Ahab is in critical condition. When the Supreme Leader suffers a devastating injury, he has no choice but to team up with an elite North Korean doctor (LEE Sun-kyun) to not only save himself but his target and get out of the bunker in one piece.

Launched in 1995, Korea’s #1 film studio, CJ Entertainment, is the film division of CJ Entertainment and Media (CJ E&M) which produces award winning content across an array of genres for theatrical and non-theatrical distribution, television broadcasts, digital download, and interactive gaming portals. To grow its presence in the film industry, CJ Entertainment has aggressively invested, developed, and distributed motion pictures both domestically and abroad. To date, CJ Entertainment has released over 505 titles and three of those titles, “The Admiral” (2014), “Ode To My Father (2014), and “Veteran” (2015), respectively, have gone on to become the top three, highest grossing films in Korean history. Moving into the future, CJ Entertainment seeks to create and popularize original, award winning Korean content across the globe. To that end it has created successful global productions including, 2013’s “A Wedding Invitation” in China, Bong Joon-ho’s “Snowpiercer,” starring Chris Evans and Tilda Swinton, and 2014’s “Let Hoi Decide,” which became Vietnam’s highest grossing film of all time. Visit us online at: www.cj-entertainment.com.