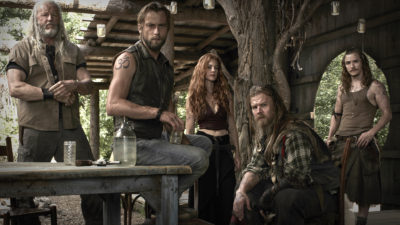 WGN’s intense original drama, Outsiders, will return for season two on Tuesday, January 24, 2017. In season two, the struggle between the clan and the town escalates – as seen in the new trailer, released in time for New York Comic-Con 2016.

Check it our after the break.

Los Angeles, CA (October 4, 2016) – WGN America announced today that the hit original drama series, “Outsiders,” will return for a highly anticipated second season on Tuesday, January 24. The network also released an intense new trailer, providing fans a glimpse into the new chapter of the Farrell Clan’s story in advance of the cast’s appearance at New York Comic Con on Sunday, October 9.  The trailer features newly named Bren’in, G’win (Gillian Alexy), explaining what happens when you threaten the rugged family who has lived atop Shay Mountain for over two hundred years.

This season on “Outsiders,” the struggle for power and control continues in the rugged hills of Appalachia as the conflict between the clan and the town escalates with the Farrells becoming more isolated than ever before.  The uneasy truce that had generally existed between the townspeople and the Farrell clan came to an end as Big Coal interests headed up the mountain and the standoff at the end of season one continues to have repercussions, putting everyone to the test as they’re forced to face new challenges and enemies.

The ensemble cast for “Outsiders” includes: David Morse (“Treme,” “Hurt Locker”) as Big Foster, the gruff and powerful de facto patriarch of the Farrell family who was shot and left for dead; Thomas M. Wright (“The Bridge,” “Top of the Lake”) as Sheriff T. Wade Houghton, a cop who has a rough and mysterious history with the Farrells, and grapples with several personal troubles of his own; Ryan Hurst (“Sons of Anarchy,” “Bates Motel”), as Lil Foster, a massive mountain man and son of Big Foster; Gillian Alexy (“The Americans,” “Damages”) as G’Winveer, the Farrell healer, thrust into leadership,  who must discover her inner strength to save her people; Kyle Gallner (“American Sniper,” “Veronica Mars”) as Hasil, a free spirit that ventures between Shay Mountain and his forbidden love Sally-Ann; Christina Jackson (“Boardwalk Empire,” “Deception”) as Sally-Ann, a beautiful girl from a mining town who captured Hasil’s heart; Joe Anderson (“The Divide,” “Across the Universe”) as Asa, a former member of the Farrell clan looking to rejoin the family;  Francie Swift (“Hostages,” “House of Cards”) as Haylie Grimes, a clever and cunning all-American community relations manager representing the encroaching coal company; and Rebecca Harris (“The Good Wife,” “Sex and the City”) as Ledda, Sherriff Houghton’s no-nonsense sister.