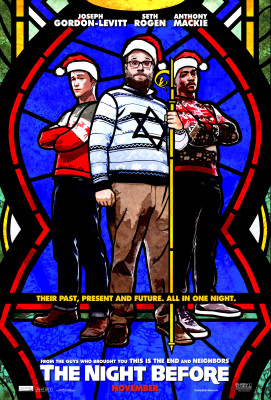 The Night Before is the new movie ‘from the guys who almost brought you The Interview’ – at least that’s what it says in the trailer.

Ethan (Joseph Gordon-Levitt), Isaac (Seth Rogen) and Chris (Anthony Mackie) have hung out every Christmas Eve since Ethan’s mother died on that night fourteen years ago. Now, with Isaac about to become a dad and Chris, an NFL star who’s just to famous to be hangin’ with them anymore, the three set out to have the maddest Christmas Eve ever before they end their tradition.

The Night Before’s first trailer is a red band one and very NSFW. It  opens on November 25th.

From the guys who brought you Neighbors, This Is The End, and ALMOST The Interview…This holiday season, don’t miss these 3 dudes, bros, and ride or die homies have the ultimate last Christmas night out as 3 childhood friends become 3 wise men.

Release Date: November 25, 2015
Ethan (Joseph Gordon-Levitt), Isaac (Seth Rogen) and Chris (Anthony Mackie) have been friends since childhood, and for a decade, their yearly Christmas Eve reunion has been an annual night of debauchery and hilarity. Now that they’re entering adulthood, the tradition is coming to an end, and to make it as memorable as possible, they set out to find the Nutcracka Ball – the Holy Grail of Christmas parties.