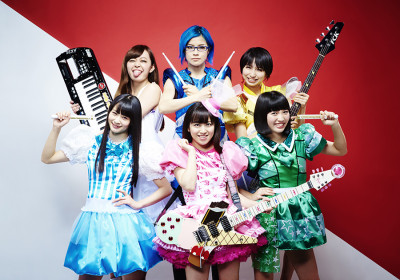 Gacharic Spin – an all-girl pop/rock band with influences ranging from dance and pop to rock and industrial – will be appearing for a special concert performance at the 2015 J-Pop Summit on Saturday, August 8th.

Follow the jump for details and to check out a couple impressive videos (these women can play!).

Celebrating its 5th anniversary this year, Gacharic Spin is a true force of musical power and renowned as one of the most aggressive and flamboyant all-female bands from Japan!

Taking its name from the word, “Gacha,” derived from the Japanese word gacha-gacha, meaning “clattering,” each members’ character and complex sound reverberates and mixes perfectly with singers’ Hana and Oreoreona’s melodic vocals, to result in a spectacularly unique and danceable sound. Drawing influences from everything from dance and pop, to rock and industrial music, Gacharic Spin’s energy-filled live performances and potent musicianship have made them a band to watch! The band’s next full length album is set for release this fall by Victor Entertainment.

Less than a year after forming in Tokyo in 2010, the band appeared on Japanese national TV on broadcaster NHK’s popular program, “Music Japan.” Gacharic Spin initially released several singles independently and is active in variety of fields, also serving as the backing band for pop singer, Nanase Aikawa, and working as mo-cap (motion capture) actors for Sony PSP Project Diva video game which features the massively popular virtual vocaloid pop diva, “Hatsune Miku.” Members of Gacharic Spin even coached members of Japan’s legendary idol group – AKB48 – for their performance in the “GIVE ME FIVE!” music video.

Gacharic Spin is signed to Victor Entertainment Corp., and marked their major label debut earlier this year with, “Gachatto Best 2010-2014,” an album collecting choice tracks from their indie years. In Japan, the album peaked at No.7 on Oricon’s daily chart and No.20 on the Oricon weekly charts.

In addition to playing over 100 live shows annually throughout Japan, Gahcaric Spin is building a fervent international having played live dates in Korea, China, Hong Kong as well as in the U.S., France and Luxemburg. The band has appeared at major music festivals in Japan including The Sekigahara Live Wars, Summersonic 2014, Inazuma Rock Festival 2014, Mega Rocks 2014 and Countdown Japan.