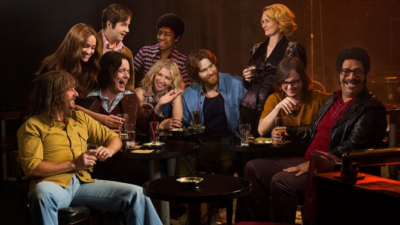 Showtime’s new series, I’m Dying Up Here follows the progress (or not) of a group of struggling comics in the seventies – and the club, run by Goldie (Melissa Leo) in which they earn their laughs (or not).

I’m Dying Up Here premieres on Sunday, June 4th (10/9C). Check out the first trailer after the break.

Music featured in the official trailer is “Blinded by the Light” by Manfred Mann’s Earth Band.

Produced by SHOWTIME, I’M DYING UP HERE is created and executive produced by Dave Flebotte, and executive produced by Michael Aguilar and Golden Globe winner Jim Carrey, along with Christina Wayne for Endemol Shine Studios and Assembly Entertainment. The series is based on the non-fiction book of the same name by William Knoedelseder. The pilot was written by Flebotte and directed by Jonathan Levine.