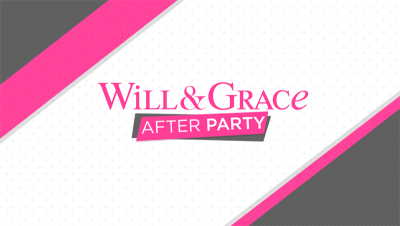 In a classic ‘morning after the night before’ situation, NBC is launching the Will & Grace After Party – a digital series that will pop up online the morning after each of the first six new Will & Grace episodes.

Will & Grace After Party will be hosted by E!’s Kristin Dos Santos and will look at the series as whole – rather than just the new episodes.

Universal City, Ca, September 27, 2017 – The “Will & Grace” hysterics won’t end on Thursday nights! NBC is bringing the ultimate fan experience to life with the “Will & Grace After Party,” celebrating all of the reasons we love the iconic sitcom.  The after show will be available Friday mornings, the day after the broadcast airing, of the first six episodes of the season, and can be found across the NBC app, the “Will & Grace” social accounts, YouTube channel, E! platforms and NBC’s participating owned and affiliate station sites starting September 29.

Set in a New York-style bar, the “Will & Grace After Party” show combines  pop-culture maven Kristin Dos Santos (E! News Executive TV Editor) with “Will & Grace” superfans for a viewing party, games, trivia and exclusive behind-the-scenes material—not to mention surprise appearances from the show’s creative team and special celebrity guests. Over the course of the show’s first six episodes, “After Party” will provide an all-encompassing fan-centric journey through current and past episodes of Will & Grace and its influence on pop-culture since its initial debut in 1998.  Burning questions will be covered like who had better boyfriends – Will or Grace? What were some of Jack’s best and worst side hustles? How does Karen manage to drink so much and stay alive? The “After Party” will cover it all with a wink and a smile with real fans getting to be the stars of the show right up until last call.

“With the ‘Will & Grace After Party,’ we set out to create a true fan experience celebrating the return of one of the most iconic shows on television,” said Rob Hayes, Executive Vice President , Digital, NBC Entertainment. “Rather than just focusing on individual episodes, we’re going to dive into the series as a whole, discussing its place in pop-culture, and what it means to fans. I can’t think of a more appropriate promotional partner than E! News and Kristin Dos Santos as our host. She’s not only a TV expert, but a bonafide ‘Will & Grace’ fan.”

“Will & Grace After Party” host and E! News Executive Editor, Kristin Dos Santos says of the project, “I’m truly honored to be a part of this very cool experience for fellow fans of ‘Will & Grace.’ It’s going to be so much fun celebrating this iconic show that has meant so much to so many people.”

The hit comedy series “Will & Grace” features actors Debra Messing as Grace Adler, Megan Mullally as Karen Walker, Eric McCormack as Will Truman and Sean Hayes as Jack McFarland. The series follows best friends Will and Grace as they navigate living together, while they deal with their eccentric friends Karen and Jack. The show originally aired on NBC starting in 1998, with the season eight finale coming in 2006. “Will & Grace” rejoins the NBC lineup with all new episodes Thursday, September 28 at 9 PM.