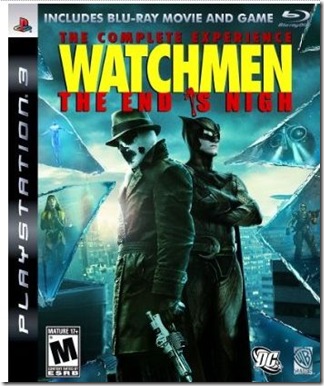 Going through Watchmen: The End is Nigh Complete Experience is odd, weird, strange, but in a good way; I don’t know how to approach this review, do I review it as a PS3 Game with a Bonus Blu-ray thrown in, or do I review it as a Blu-ray set with a full PS3 game experience?

On the one hand the original Watchmen: The End is Nigh Game is lazy game making, the environments are all the same and the graphics are about on the level of a Playstation One. In some cases it’s very pixilated, dark and literally black – gave me headaches at certain points. The environments are the same throughout the entire game – with only slight variations between the chapters. But what’s amazing is the level of pure, unadulterated violence. I mean playing as Rorschach is just a visceral experience. You see blood splattering, hear the sound of bones breaking and the quick time events are appropriately brutal. This game isn’t for the faint of heart – unless you play as Nite Owl whose moves are quite pedestrian – he doesn’t even pick up fallen weapons. No, if you want to experience the awe inducing violence you have to play the game as Rorschach.

Chapter 1 of The End is Nigh is a 6 chapter story that takes about 5 or 6 hours to play through. Each chapter feels very long and never ending, that’s in part to the repetitive nature of the game and the never ending warehouse rooms. It’s been several months since I played it, so forgive me but I forgot the story. The new part, Part II takes place a few days before the Keane act is passed and Rorschach asks Nite Owl to help him find a missing girl. The first thing I noticed and liked about Part II is that you can actually see what you are doing; there isn’t a moment in Pt II where everything goes pitch black. The levels look a little cleaner as well. 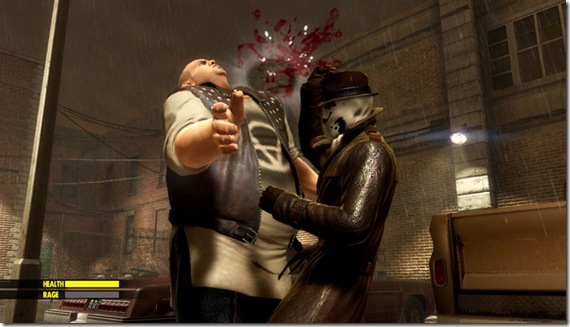 In Part II you don’t have to run around "searching" for power ups to unlock all your fighting abilities and there’s just more people to fight. At any given time there are at least 10 bad guys to wail on and they keep coming at you. The ending felt really abrupt and cheap. I sat there and stared at the television for a good several minutes going this can’t be IT, but it was. There’s no payoff to the story and it’s only 3 chapters long with each chapter taking about an hour to go through. It felt like a really rushed and cheap money grab. But man, the mindless violence you inflict is a thing a beauty. 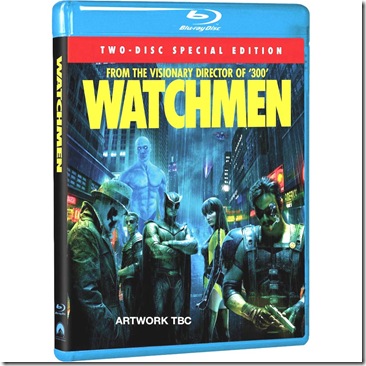 Hey, did I mention this is more than just a PS3 Game? It’s also a 2 disk Blu-ray set that includes the long waited extended Director’s Cut which makes an already long, tedious movie feel even longer. I didn’t and don’t hate the Watchmen movie, I like it well enough and appreciate the brilliance of the source material, but I’ve never been able to connect with it. It always felt hallow to me and the movie is the same experience. Director Zack Snider clearly loves this material it’s almost a frame by frame and in some cases word for word lift from the book. If you love the Watchmen graphic novel, I can’t see why you wouldn’t like the movie – other than the changed ending.

This entire movie is shot in dark colors with shadowy overtones even all the day scenes are raining and overcast so I’m not sure what being on a 1080p, 2:41:1 transfer will give you other than a letterboxed picture – and I don’t care what anyone says, I’ll always hate letterboxing. So yes, it’s a flawless transfer but it doesn’t improve or affect the overall experience because you aren’t dealing with a production that’s full of "vibrant" colors to begin with. The menu navigation is simple and straight forward, nothing fancy. The audio is Dolby 5.1 TrueHD and Dolby Digital 5.1 in English, French and Spanish. There are subtitles in English and French.

While I’m kind of "meh," about the movie, I liked the game a lot. One thing is for sure this package raised my expectation level for all future movie based games. If gaming companies want us to play their crappy tie-ins then they should at least throw in the movie the game is based on. The whole is better than the sum of its parts. The only thing missing from this package is Digital Copy. On its own, there’s no way the Game would be worth more than say $15 or the Blu-ray $20, but as an overall package and experience there’s a lot of bang for your $46.99.