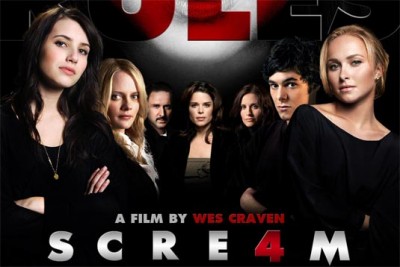 I went to my new local theater – the AMC Dine-In in New Jersey, got comfortable had a coke and ordered a tasty Rib-Eye burger, settled down to watch Scream 4, what a let down. I’m not saying I had high hopes walking into it but the original Scream is still one of my favorite horror movies and Sidney Prescott (Neve Campbell), Dewey (David Arquette) and Gail Weathers (Courtney Cox) are my favorite horror movie trio. The problem is, the primary gimmick and hook of Scream – the killer phone calls – was killed by the time they got to Scream 3. If it wasn’t, they stomped it into the ground and pissed on their own gimmick in the first five minutes of Scream 4. The movie never recovers from an abysmal “never-ending” pre-credit sequence.

The problem is writer Kevin Williamson and director Wes Craven spend the entire movie winking and nodding at the audience that they fail to deliver a movie that truly breaks out of the conventions that they continually mock. The first movie does this successfully because it was aware that it was a horror movie, told us the rules of the genre and then reveled in actually following through with the rules it laid out. It was a loving, homage to classic horror. I’m not sure what this movie is. It’s a homage and caricature of itself.

In the beginning Williamson and Craven try to recapture the appeal of the original by once again showing a couple of girls sitting around watching a horror movie, while talking about how dumb they are. The sequence ends with them, of course getting stabbed. Here’s the Craven twist, turned out to be a movie within a movie, and he does the gimmick two more times before Scream 4 officially begins. By the time the real beginning of the move happens, I stopped caring.

The Ghostface killer’s gimmick of calling his victims and asking trivia about scary movies just felt tired and “gimmicky…” Talk about a killer who likes to monologue everyone to death – Ghostface is it. After awhile, I was just thinking, shut up and kill someone. Sheesh. I also didn’t like the fact that they finally gave him a name in this one. In previous movies, it was always just “the killer.” Now it’s officially “Ghostface.” How lame is that? The trio of Campbell, Cox, and Arquette are what hold this movie and franchise together. Their chemistry is still strong as ever.

I know you don’t ask questions in horror movies, but just once I’d like to see people stand their ground and fight back. Scream is a movie where this should happen, how funny and cool would it have been if instead of running around a garage (where the killer always attacks from behind, anyway) the victim stood their ground in the middle where they could see in all directions or sat on the hood of the car and screamed “Come and get me if you have the balls!” One of the reasons Gale and Sidney are cool is they do at least fight back. Sure they run away but they at least have enough sense to punch, kick, throw things, and do whatever they have to.

The big reveal of Scream 4 is a complete rehash of the original and just because the writer and director are aware of it and makes a joke about it, doesn’t make it right. For Scream 4 to succeed at it’s own self aware conceit it really needed to do something different than other horror films beyond simply copying it’s own formula and pat itself on the back by doing so.

6 thoughts on “Michelle Stabs Scream 4 in the Gut!”