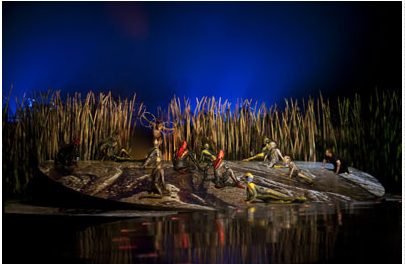 I love Cirque Du Soleil. When people ask me what the heck the show is all about, I simply describe it as “The Circus for Pretentious People.” I mean there’s clowns, jugglers, high rope acts, and all the trappings of a Circus, but done as only Cirque Du Soleil can do it. How else do you describe the almost indescribable or at the very least one of the most surreal experiences you are likely to have in your lifetime. The thing that makes Cirque shows so unique and different is the fact that every touring production or home production (like the Vegas shows) has its own style or theme. It’s almost like watching a Prince concert, you just never know what you are going to get.

Cirque Du Soleil – Totem, hit Baltimore, MD April 7 and had a sold out house for it’s April 6th preview night – how did these people even find out about preview night? The show is currently playing at Grand Chapiteau (say Chapiteau with your nose up in the air and a monocle in your eye) Westport Waterfront until May 1. This is one of Cirque’s most ambitious shows yet.

Normally a Cirque show will have one theme and natural story progression that ties all of its def defying acrobatics together that’s usually accompanied by an amazing soundtrack. This time the producers of Totem seek to tell the evolutionary story of a species on a single marshland from the Spark of Life to the end of Time through music and various set pieces. 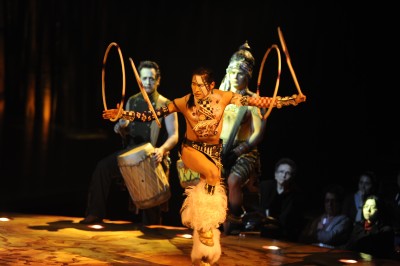 It took quite awhile to figure out exactly what was going on with this plot. Once I did it made everything that came before it come as a revelation. Starting from the very beginning of the show. It starts with one giant green egg on stage. Someone in a glittering diamond outfit (later I realized was the Spark of Life) comes from the ceiling and sets everything in glorious motion. It’s a brilliant opening that leaves you scratching your head and marveling at the same time. 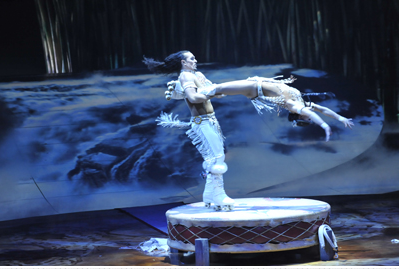 Totem is filled to the brim with stunning moments. There’s a beautiful Indian Love dance between two dancers on Roller Skates who are smoldering with chemistry. This moment is set to an amazingly cool Indian mating song that Cirque calls Onta. The song is textured with traditional Indian beats, story telling and mating calls. The two roller skating performers, Massimiliano MEDINI, Denise GARCIA-SORTA just oozed sex. Two people should not be allowed to look that sexy together. They had the entire audience mesmerized by their enviable beauty.

The real star of the show is the amazing set that seamlessly transforms from a beautiful 3D like waterfall to a beach, to a space ship, to a Volcano, to a speedboat and all things in between. The set continuingly amazed throughout the night leaving everyone around me whispering to each other how the heck did they do that? There’s one amazing moment at the end where it looks like people are swimming in the ocean, at first it looks like a video projection then one by one each performer comes out. It’s hard to describe but an amazing sight.

Because Cirque tackles different eras, the soundtrack reflects the diversity of the times and features everything from drum heavy Indian music, to Beach Boys style Surfing Music to Latin and Cirque even tries their hand at a little hip hop. It doesn’t always work but it’s always surprising what comes next. Just when you think you have a handle on things, they flip the script. I think this is one of the most accomplished Cirque shows that I’ve seen in quite awhile. Make sure you pick up the amazingly diverse soundtrack on the way out.