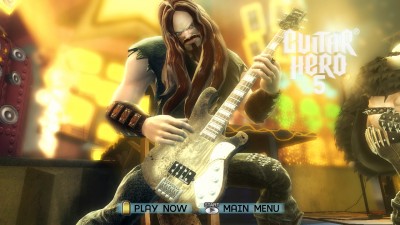 I feel like I’ve reviewed Guitar Hero and Rock Band so many times that I’ve run out of things to say about them.  Originally, I wasn’t excited about Guitar Hero 5, Activision’s latest milking of their music game franchise.  I looked at the initial set list and had no idea what many of these songs were. I popped the game into my X-Box 360 and nearly dropped the guitar when I saw the full list. It has Peter Frampton’s Do You Feel Like We Do! I was sold on the basis of that song alone, but then I saw the Rolling Stone’s Sympathy for the Devil, and finally, finally, Nirvana’s Smells Like Teen Spirit.  My god, what a triple threat. On top of these great classics, for the first time ever, you can import previously purchased tracks into a Guitar Hero game – for free.  I always end up purchasing some tracks for my Guitar Hero games but lose track of which disk each purchased track went with – another reason I’ve grown to dislike the GH franchise. Now, I, at the very least have all my purchased tracks on one disk. Way to go Activision.  Now how about importing my other game disks? How cool would it be to have both Free Bird and Do You Feel Like We Do on the same disk?

The presentation of the track charting has undergone a “radical” change. It looks less colorful than before and seems washed out and “raised.”  When you activate Star Power lights flash all over the screen. At first I didn’t like it at all, but it has grown on me. I love most of the charting here.  It’s challenging enough on normal mode that it took me several tries at a song before I achieved a perfect score and I rarely felt like I needed to bump the game level up to Hard to get “everything” out of a song.

The animation has gotten really good over the last year and the artist models are freaky good – like the Kurt Cobain one.  I never really look at the in-song animations because I’m always too focused on playing the actual song but there doesn’t seem to be any glaring moments of stupidity – like Rock Band having a skinny Punk Rocker dude singing Alanis Morissette songs. That still freaks me out whenever I try and play You Oughta Know. Is it that hard to have a female singer? 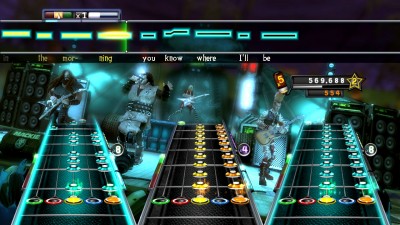 The Career mode has returned and once again it’s a nice easy progression through all the different stages. If you don’t want to unlock the songs through the career mode, you can dive right into them using Quick Play.  All the game tracks are available here. You can create mega 20 or 30 song set lists or play individual songs. My one gripe about quick play – individual songs, is it doesn’t give you the option to Replay a song. Once the song is over it kicks you back to the main track list and it became frustrating scrolling through almost 100 songs (85 song track list plus purchased titles) to get to the Ss. Especially when I kept getting side tracked by new song discoveries.  I also wish you could save custom set lists.

There’s a really robust Online Multiplayer mode where you can do Pro Faceoff, Rockfest, Team Pro-Faceoff, Team Rockfest and Band Vs. Band. I don’t have much to say about the online mode because I could never find a game and in previous games it was annoying trying to come up with an original band name that the service would recognize.

GHStudio has returned with an easier to use interface, and a couple of new additions: GHMix 2.0. You can also download and play the compositions of other players with GHTunes – which I still find difficult to navigate or jam along freely with any instrument to over 15 styles of music with the brand new GHJams feature. 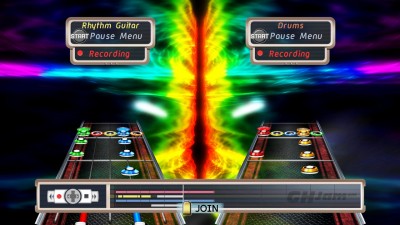 You can now easily get into and out of Band play without interrupting other people’s playing time. The game will no longer fail the entire band just because you suck. The game even supports multiple instruments, if you have four people that want to drum and have four drum kits, you can go for it.

This year’s track list is pretty amazing. There’s something for almost everyone here including the three songs I’ve been dying to play since the Music Game genre exploded a few years ago.  But the track list also includes some really cool pop and funk gems like Superstition, Play That Funky Music, Queen, Bon Jovi, The Gorillaz, Bowie and other cool stuff.  Of course there’s still an awful lot of speed and heavy metal as well. But for the first time it feels like the folks at Activision and Red Octane are really expanding the selection. The main set list along with the ability to finally import (at least purchased) tracks into the game really goes a long way towards making this an almost perfect set list.

I’ve always preferred Guitar Heroe’s gameplay over Rock Band’s but felt GH’s tracklist was always really weak.   In GH5 Activision and Red Octane have brought the thunder.  This is an excellent installment, but I’m leery that Activision will just abandon it in three months to focus on whatever the next version of GH will be. They need to slow down and support Guitar Hero as a PLATFORM dand not a franchise to be milked.  This means no more new GH games for a while and a lot more DLC.

One thought on “Michelle Rocks out to Guitar Hero 5”