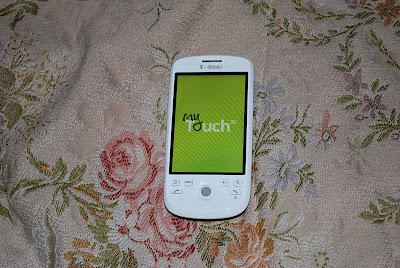 Generally, AT&T has been the best network I’ve ever used in my home area of DC, but the minute I leave the area it almost never works properly. It’s a good thing I don’t travel often or I would drop AT&T like a bad habit. So T-Mobile gets mad points from me for it’s overall stability. Not to mention T-Mobile has always had more reasonable calling plan pricing than AT&T.  I could save $30 or $40 a month if I ever switched.

The navigation on the phone feels a bit clunky and takes a bit to get used to and there are a "million" different notification icons at the top of the phone that eventually get annoying. Luckily you can turn this off. Everyone complains about the iPhone’s lack of multitasking and I agree, I think it’s silly to have to leave my Slacker Radio app to go and check an incoming email.  With Android you can have 10 or 20 apps open at the same time if you want to. My problem is I can never tell if an app is open or closed. I always just click the X button, but all that does is minimize apps, you have to go into each apps menu to close them.

I love the multimedia capabilities of Android phones and the MyTouch 3G, but T-Mobile ticks me off because they keep gimping their phones by refusing to force handset makers to include a freaking standard headphone jack. So they include a little dongle you can attach to the phone. Who wants to carry around and keep up with a dongle just to be able to listen to music with your headphones? The MyTouch 3G loses a full point and a half for this. The audio on this phone blows away anything my iPhone producers. The speakers are pretty booming I heard them clear across the room. 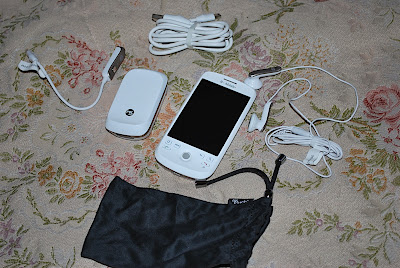 For your listening pleasure the Android marketplace includes all the standards – Slacker, Pandora, IMeem (which is terrible) and Last FM (can someone please tell me how you actually play music on this stupid app?).  The T-Mobile network is slow, so I pretty much gave up using these apps because they had a bad habit of constantly buffering and stuttering. The MyTouch does have a slot for a MicroSD card so theoretically you can expand the memory to up the current 32-gigs. I always like having the capability of adding memory to devices instead of being locked in and forced to purchase an entire new device just to increase space. I never did figure out how to actually get to the removable card and battery.

I’m still not a fan of the Android Market. I find it to be unwieldy, hard to find anything decent, and there’s too much of a wild west feel to it and there’s no quality control – some of the apps i downloaded were buggy. A lot of the apps also had real confusing interfaces making them hard to navigate. 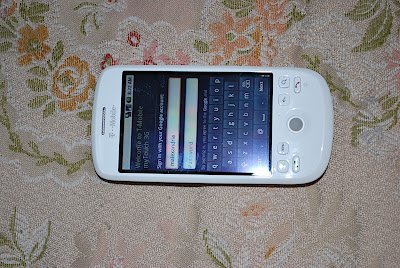 With the new Google Cupcake you now get a full touch screen keyboard. It feels nice and responsive, although it’s strange it rotates on the phone but if you are in an app like Gmail, the keyboard will not go into landscape mode. 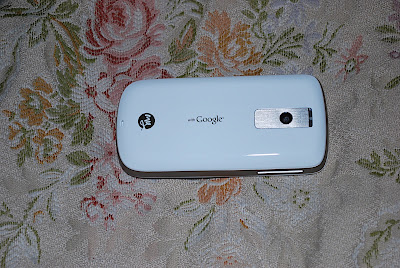 The MyTouch includes a 3.15 MP camera on the back that is capable of taking both still images and video with autofocus, but there’s no flash.  The quality of the image is kind of spotty; obviously it’s not good in low light, but ok in standard sized rooms. 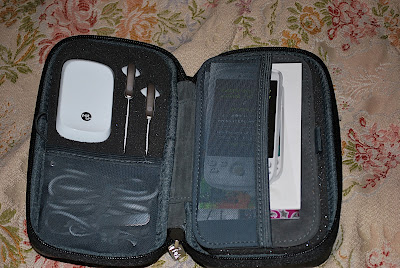 I really loved the design of this phone, it’s small and lightweight but the 320 by 480 pixal display is large and beautiful.  The curves around the edges give the phone a really smooth and slick feel. The phone also includes 3G radio (HSDPA, 7.2 Mbps; HSUPA 2 Mbps), Wi-Fi and Bluetooth (with A2DP) and 192MB RAM / 256MB ROM. The battery lasted overnight on standby but seemed to drain really quickly during active use – for instance it only lasted a couple of hours while listening to Slacker Radio. The included hard carrying case is a nice addition.

The only thing that keeps this phone from being a strong contender to the iPhone is the fact that it is on a slower network – but it’s more reliable and the lack of a standard headphone jack.  I like this phone a lot and can’t wait to see what some of the other new T-Mobile phones will be, this one is certainly a step in the right direction.