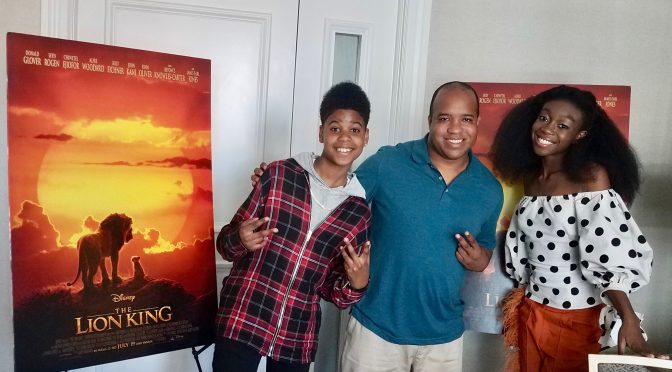 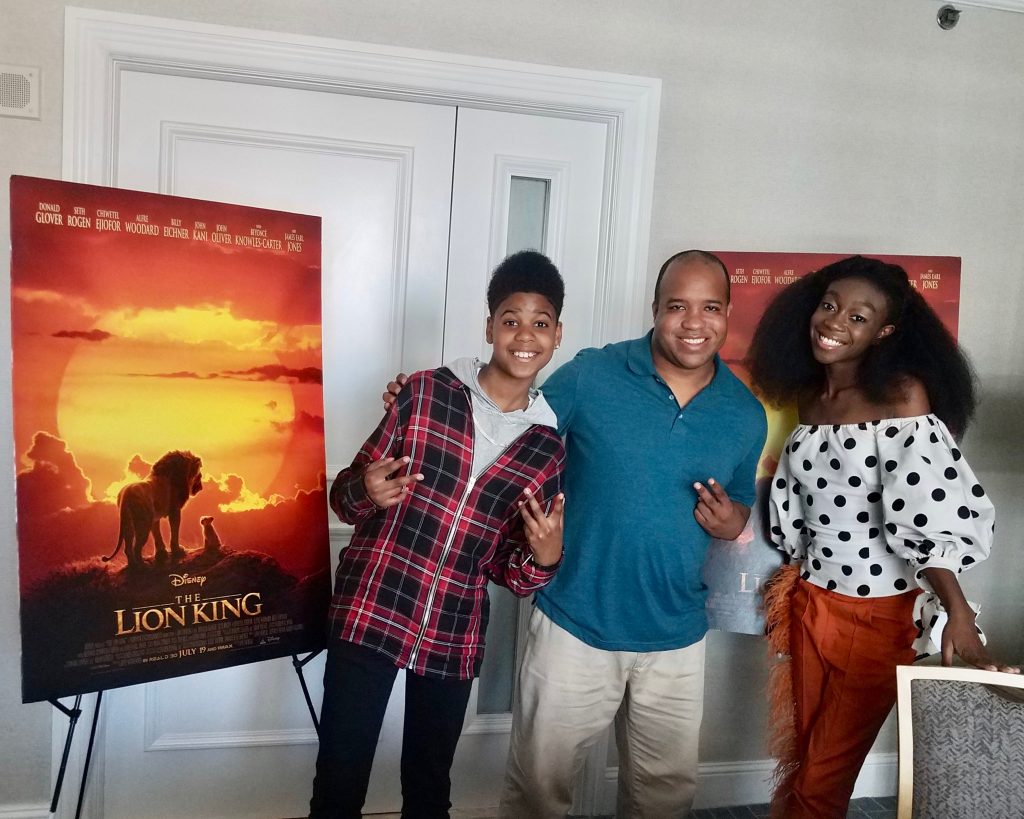 How does it feel to transition from those two films to the epic Lion King?

JDM: I’m sorry. I’m not going to lie, I just hit my funny bone when I went like this. Ooh! I’m alright. Just want to let you all know. Get all of these jitters out.

Shahadi Wright Joseph (SWJ): Well, it feels amazing to be doing both movies, but we actually shot The Lion Kingbefore we shot Little and Us.

SWJ: So, it was that long ago that we were shooting and it was a pretty quick process and we had such a blast.

That’s pretty good. Now Shahadi, this is the second time you were in The Lion King. You were in the Broadway show. You had 280 performances; you started at the age of nine. Were there any subtle differences between the Broadway show and being in the movie?

SWJ: Well, yeah you can definitely mess up while you’re shooting The Lion King, the all new one. And I feel like Broadway is just a little bit more structured, but while we were recording the remake, we had a lot of freedom from Mr. Favreau and it was really great because I had never done voice acting before in a feature film. It was really awesome.

Excellent, J.D., you have an amazing, incredible singing voice.

Especially in Little, and now you’re in The Lion King. When did you realize that you wanted to go into acting?

JDM: I realized I wanted to go into acting, I was like six years old. It was just about six years ago. So, that was a while ago. I was just looking at the tv, and I asked my parents, “Hey, can I do that?” I just wanted to be on the TV. I just wanted to watch myself one day, and so I asked them, “Can I do that?” They said, “Yeah, sure! Then it took a month, we got our first audition. I booked it. I booked my first audition; I’m pretty happy about that.

And six years later, I booked The Lion King, I booked many other things, and here I am.

Here we are indeed, especially talking about this film. So, I want to know what—to the both of you—what is your favorite scene of the film?

JDM: Ok, my favorite scene? It’s either when I meet Timon and Pumbaa, or the stampede scene. That one was fun.

SWJ: I would say either I Just Can’t Wait to Be King or Can You Feel the Love Tonight.

Nice. Now along the lines, what’s your favorite song?

JDM: My favorite song of the film I would say would be Hakuna Matata.

JDM: It’s like a jungle vibe, a nice, happy song. I’m singing in the song.

JDM: I just really love the transition from young to old in the song.

SWJ: Yeah, definitely. I would definitely say Hakuna Matata as well, because that is my favorite. It’s fun, it’s energetic, and it’s when Simba gets to learn a lot about himself.

Absolutely. Now, did you both record your lines together in the booth, or did you do it at separate times?

JDM: We were together in the booth.

JDM: We were together, there was this big carpet where we could walk around, and just act it out, act out the movie and feel like we’re really in it. I know we’re in the movie, but in the movie.

Right, so you can experience the moment, the movement, you get the vibe instead of just being at a booth, standing sill, recording your lines without feeling emotion.

I get you. So as we know, Mufasa—the mighty king, Mufasa—gives some advice to you, Simba. But I want to know from the both of you, what is some of the best piece of advice a person, a family member has given to you and you carried it through your career and through your life?

SWJ: My dad says two things. He says, “Remember your roots;” you know, remember where you come from. And “People are crazy.”

(laughs) So you were both recently at the Essence Festival in New Orleans. That must have been a worthwhile experience. Tell us about how you felt performing there.

JDM: It was really awesome performing at the Essence Festival. It was cool being there. We did a lot of interviews, met a lot of people, saw a lot of faces. We performed a lot—no, we didn’t, it was only one time.

SWJ: It was really awesome.

JDM: It was really awesome, yeah. Being at Essence Festival was really cool.

SWJ: Yeah, it was really beautiful. I think I definitely just want to go back to Essence Festival just to go and just have fun. But, we had an awesome performance, everybody was there and watching. It was just great. I had a fun time.

Well, you guys have been to the Essence Festival, I have not been yet, so I’ll have to travel there one day. So, what do you hope the audiences—especially since our new audiences, it’s been 25 years, a quarter of a century since they’ve seen the first film, what do you hope they take away from this new Lion King?

SWJ: Well, when I was watching the film—I’ve seen both—and I feel it’s just a totally different experience when you’re watching the all new one. So, I think people are going to have a lot of fun and they are going to be dancing in their seat and crying. It’s just…it’s a whole rollercoaster.

JDM: What I hope they receive from The Lion King, I hope they know that all of this was CGI. Nothing was real. I don’t want them to think that nothing is real. I just want them to know that the animation level and the quality has really leveled up. Also, I think the actors and actresses in the movie are pretty good. I think you’re going to laugh a lot, cry like she said, and to be dancing to the songs. I hope they just love the movie.

Well, you guys made me cry at the end of this film, so job well done.

Since you guys played most likely the most epic role of your lives, what is a role down the road that you’d love to play, whether it’s a type of movie or specific type of role?

JDM: I think I can play him because he’s only thirteen, I’m turning twelve tomorrow.

JDM: Thank you! So, I think I kind of look like Miles Morales. I’m pretty athletic…I’m not (not clear what he says here)

JDM: I think I can play Miles Morales. What do you think?

SWJ: I would want to play young Tiana from The Princess and the Frog, because that was my favorite princess movie growing up, so…I would say Tiana.

JDM: The Princess and the Frog. I really love that film.

Wonderful, thank you JD & Shahadi, Check out The Lion King – IN THEATRES NOW