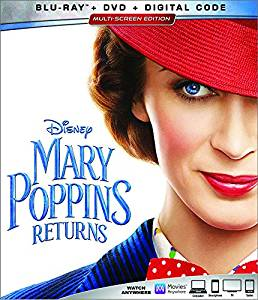 The film – which we reviewed very positively – has been nominated for four Academy Awards® and will be on Digital 4K Ultra HD™ on March 12 and on 4K Ultra HD and Blu-ray™ March 19.

A complete list of bonus features – and a new trailer – follows.

“a movie that is practically perfect in every way”
– Pete Hammond, Deadline

“A sequel worthy of the name”
– Richard Roeper, Chicago Sun-Times

The One-and-Only Mary Poppins Is Back and Nominated for Four Academy Awards®, Including Best Original Song

Bonus material explores the making of “Mary Poppins Returns,” going behind the scenes with the star-studded cast and crew who collaborated to make even the impossible possible. Extensive extras include a trip down Cherry Tree Lane with original cast member Dick Van Dyke, a sing-along version including the heartfelt Academy Award®-nominated “The Place Where Lost Things Go,” bloopers, deleted scenes, a deleted song and filmmaker commentary. Features also reveal the magic and moxie that went into creating large-scale musical production numbers, such as “Trip a Little Light Fantastic,” a rousing song-and-dance number led by Jack and his fellow lamplighters; “The Royal Doulton Music Hall” and “A Cover Is Not the Book,” showcasing the tremendous talents of Blunt and Miranda; “Turning Turtle,” an upside-down sequence featuring Meryl Streep as Mary’s eccentric Cousin Topsy; and “Can You Imagine That?” an underwater adventure with Mary Poppins and the Banks children.

In “Mary Poppins Returns,” Michael Banks (Ben Whishaw) — just a child when Mary Poppins first visited 17 Cherry Tree Lane — is now a grown man raising his children Annabel (Pixie Davies), John (Nathanael Saleh) and Georgie (Joel Dawson) with help from his sister Jane (Emily Mortimer). Times are tough in Depression-era London but the winds begin to change and the enigmatic governess, whose unique magical skills can turn any ordinary task into a fantastic adventure, enters the lives of the Banks family once again, having not aged a single day. Teaming up with an old friend, Jack, they take the Banks children on a series of whimsical adventures, encountering colourful characters like Mary’s eccentric Cousin Topsy (Streep), Jack’s lovable band of leeries and bank executives William Weatherall Wilkins (Colin Firth) and Mr. Dawes Jr. (Van Dyke) — bringing life, love and laughter back into the home.

“Mary Poppins Returns” will be packaged and released in several different formats, giving families the flexibility to watch it on a variety of different devices. Viewers can instantly watch the film in Digital UHD, HD and SD, and bring home a physical copy of the film as the Ultimate Collector’s Edition (4K UHD, Blu-ray and Digital Code), Multi-Screen Edition (Blu-ray, DVD and Digital Code), a single DVD or a Digital Bundle with both “Mary Poppins Returns” and the 1964 classic “Mary Poppins.”

Bonus features include*:
BLU-RAY & 4K ULTRA HD™:
• Deleted Song—“The Anthropomorphic Zoo” – In this early song sequence, Mary Poppins and the children visit a very special zoo where the humans and animals trade places.
• The Practically Perfect Making of “Mary Poppins Returns” – Join filmmakers and cast on an amazing journey to embrace the legacy of the original film while making a fresh modern sequel.
o Introduction – Filmmakers and cast remember the first Mary Poppins movie and share the thrill of working on “Mary Poppins Returns.”
o “(Underneath the) Lovely London Sky” – Discover how the team mined PL Travers’ books for a fresh perspective on a much-loved character. Plus, meet the Banks children!
o “Can You Imagine That?” – Be on location for Mary’s iconic entrance from the sky, and explore the movie’s original songs, inspired by the Sherman Brothers.
o “Nowhere to Go but Up” – Experience being on set with the legendary Dick Van Dyke and Angela Lansbury, and celebrate the joy of choosing the right balloon!
• Seeing Things From a Different Point of View”: The Musical Numbers of “Mary Poppins Returns” – Go behind the scenes and experience the film’s production numbers from a new angle.
o “Trip a Little Light Fantastic” – Led by Lin-Manuel Miranda, the cast performs the film’s biggest production number, with dancing lamplighters, bicyclists and more!
o “The Royal Doulton Music Hall” / “A Cover Is Not the Book” – Find out what it takes to create two musical extravaganzas inside an animated world, highlighted by dancing animated penguins!
o “Turning Turtle” – Mary’s eccentric cousin, Topsy Turvy, played by Meryl Streep, has an unusual house that turns this musical number upside-down.
o “Can You Imagine That?” – Dive under the bubbles with the cast and crew to see how this exuberant number was created.
• Back to Cherry Tree Lane: Dick Van Dyke Returns – Dick Van Dyke, who played Bert and Mr. Dawes Sr. in the first film, returns after 54 years to Cherry Tree Lane as Mr. Dawes Jr.
• Practically Perfect Bloopers – There’s nowhere to go but up with the cast and crew in this lighthearted collection of flubs, goofs and prop fails!
• Deleted Scenes
o Leaving Topsy’s – After their visit to Cousin Topsy, Mary, Jack and the children pause to take a look back.
o “Trip a Little Light Fantastic” – The leeries light up the screen in this extended clip from the movie’s biggest musical production.
• Play Movie in Sing-Along Mode – Sing along with all your favorite songs as you watch the movie.

“Mary Poppins Returns” is produced by John DeLuca, p.g.a., Rob Marshall, p.g.a., and Marc Platt, p.g.a., with Callum McDougall serving as executive producer. The film features all-new original songs with music by Marc Shaiman and lyrics by Scott Wittman and Shaiman, as well as an original film score by Shaiman.