FOX’s Lucifer (Mondays, 9/8C) is a silky smooth hour of supernatural sleuthing and amoral indifference featuring the Lord of Hell – Lucifer Morningstar (Tom Ellis) himself – who has tired of the boring responsibilities of Hell and quit to live up among the most unpredictable of God’s creations: humanity. So, naturally, he runs an upscale nightclub/bar, with his fellow former inhabitant of Hell, Maze (Lesly Ann Brandt).

He doesn’t give a fig about our laws, but when a friend of his – whom he helped make a star – is killed he takes personal offense which leads him to provide (impose) his help on the detective investigating the case.

When he’s questioned by Detective Chloe Dancer (Lauren German), he’s written off as a flake because he’s been complete honest about who is and how he survived the hail of bullets that killed his friend Delilah. And when she stalks off without promising to find the woman’s killer, he’s quite upset.

The next day, Lucifer interrupts the wedding of an old friend, Jimmy Barnes to see what he knows. An interesting sequence includes some uncomfortable truth-telling – people tend to blurt out their darkest desires, deepest secrets and longings and such to the Prince of Lies… 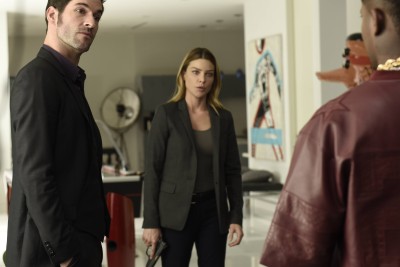 In the course of the ‘investigation’ we learn all kinds of juicy stuff – a cop who tried to persuade Detective Dancer to call Delilah’s murder and open and shut case is her ex-husband; she’s a single mom trying to live down something embarrassing in her past; her seven-year old daughter Trixie (Scarlett Estevez) is smart and tough like her mom; Delilah’s therapist, Dr. Linda Martin (Rachael Harris) – whom Lucifer will swap ‘naked cuddle time’ for help working through an existential dilemma or two (can you day Daddy issues? I knew you could), and Decker is just about the only human woman who can withstand Lucifer’s ‘charms’ – to name a few.

There’s no lack of suspects, either: the producer who took her under his wing (and elsewhere); the man who actually pulled the trigger and formerly supplied her with drugs – but claimed he only did it for the money just before he died; a rapper with whom she had a tempestuous relationship…

Between Dancer’s investigative skills and Lucifer’s charm, the pieces of the puzzle slowly fall into place.

Oh, and there’s one other nifty touch – Lucifer’s frequent visits from a rather disturbing individual called Amenadiel (D.B. Woodside), who insists he return to Hell and get it back under control. (Good luck with that, buddy!)

Lucifer is based on the version of the Biblical devil from Neil Gaiman’s Sandman series and its spinoff, Lucifer. While neither Gaiman nor his successors on the spinoff turned Luci into a crime-fighting wiz, they did explore his ennui and desire to find things that would amuse and occupy him. In that context, the creators of the series have gotten the character right.

Lucifer isn’t interested in crime-fighting per sé – he’s looking for unexpected $#!+ to keep himself amused, and working with a human whom he can’t figure out. In a series that looks like it will be working with irony as a common theme, it’s also intriguing that even though he can’t stand children, Trixie really likes him.

Ellis exudes charm and delight as Lucifer, happily observing the foibles of humanity and exploring their desires. Although we primarily see Lucifer as a charming, naughty boy, there are brief moments when his real self comes through – usually when persuading someone truly evil (and therefore already primed for Hell before they’ve their last). Those brief few seconds underscore that he’s not just a charming, naughty boy – and keeps the audience from ever quite accepting him as a Good Guy.

German is appropriately hard-nosed and professional as Dancer – but sorta kinda maybe thawing the tiniest bit toward her devilish new acquaintance. Alejandro walks a line between perfectly dickish and genuinely concerned dad and ex – perhaps he’s a bit of a chauvinist.

The premiere was written by Tom Kapinos (Dawson’s Creek, Californication) and directed by Len Wiseman (the Underworld Saga) and sets the stage for what could be one of the more truly warped (in a good way) shows on network television – and the three episodes made available for critics (the premiere and episodes four and five) get progressively more interesting as Lucifer seems to be becoming less immortal – and therefore, more intrigued and more worried. Like I said, irony…