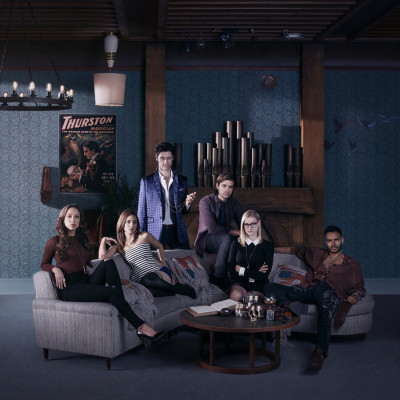 Following a mysterious conversation between two people in a wintry New York park – about something coming and getting him ready, the first half of the two-hour premiere, Unauthorized Magic, shifts to a bleak grey office of a mental health facility where a young man effortlessly makes a coin disappear and appear – to the amusement of an almost stern woman who notes that he must be the life of the party.

Cut to… a party – where the young man, Quentin Coldwater (Jason Ralph, Manhattan) is sitting sipping a beer as all around him people are laughing and dancing and talking.

We cut between these two events and, in passing, we see in Quentin’s mind’s eye, events from a series of fantasy novels – Fillory and Further – before a young woman notices he’s missing and finds him hiding in his room reading the first Fillory novel. Her name is Julia (Stella Maeve, Chicago P.D.) and she’s surprised he’s not at the party making progress with a cute girl in a unicorn tee-shirt.

The next day, they set out to his interview to get into Yale, but find the professor they were to meet has died. As the paramedics roll his body into the ambulance, one notices a package and calls after Quentin. It’s the manuscript for a sixth Fillory book.

As they walk, Quentin is excited by the manuscript but Julia just wants him to get it together and realise that his real life is just starting. They part on less than satisfactory terms and, as he walks on, absorbed by the manuscript, he stumbles from wintry New York onto the summery quad of Brakebills College for Magical Pedagogy (literally – he stumbles through a hedge), where he meets Eliot (Hale Appleman) – who directs him to meet the admissions board.

Meanwhile, Julia has gone to work and gotten off her elevator in a totally different building… 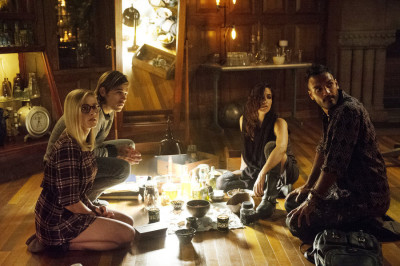 After a moment of epic discovery, Quentin finds himself taking the entrance exam for Brakebills – and Julia is there, too, though he passes and she fails.

And life will never be the same for either of them.

While he’s meeting his fellow students, Julia has found a way to foil the school’s efforts to make her forget that magic is real. He begins classes and she quickly becomes a lost soul.

Brakebills is like any other college: classes, social events cliques (except here they’re based on the various types of magicians), and, with some guidance from the slightly imperious hipsterish Eliot, Quentin begins to feel like he finally fits in somewhere.

Then, a spellcasting done to help a fellow freshman goes awry and bad stuff starts happening.

The two-hour premiere of The Magicians introduces many characters – each with their own agenda – and potential plot arcs in what feels like just a bit less time than should have been taken.

Sera Gamble (Supernatural) and John McNamara cram a fair bit of stuff into the first hour – directed by Mike Cahill (Another Earth) – especially given that a large part of the hour deals with Quentin and, to a lesser extent, with Julia. And that it ends with a bit of nastiness that could see Quentin booted from Brakebills before he’s even settled in.

Part Two of the premiere – The Source of Magic, written by Gamble and directed by Scott Smith (Cedar Cove) – takes up immediately following the events of Unauthorized Magic and introduces even more characters (or rather, gives them a bit more development) and continues the hectic pacing of the first.

Over the two-hours we meet: Penny (Arjun Gupta, How to Get Away with Murder), Quentin’s less than welcoming roommate; Alice (Olivia Taylor Dudley, Paranormal Activity: The Ghost Dimension), a fellow freshman who’s expected to do great things because of her superstar parents; Marina (Kacey Rohl, Hannibal), who has learned magic without the benefit of Brakebills; Kady Orloff-Diaz (Jade Tailor, Murder in the First), the school’s goth girl and dispenser of more attitude than even Eliot, and many, many more.

We even learn that Fillory may not be as fictional as Quentin and Julia thinks. 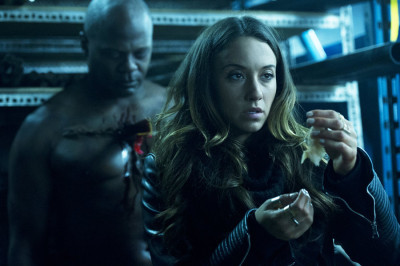 THE MAGICIANS — “The Source of Magic” Episode 102 — Pictured: Stella Maeve as Julia — (Photo by: Carole Segal/Syfy)

As the main protagonists, Ralph and Maeve are believable best friends who have come to point in life where their lives are about to diverge. Maeve projects Julia’s energy and ultimate disappointment and pain so well it’s palpable – while Ralph has Quentin’s socially awkward lack of self-esteem and hope down pat.

If there’s a problem, it’s that Quentin is just a bit too dour all the time. Hopefully succeeding episodes will finding him coming out of his personal funk and embracing the weirdness of his new school and friends.

In terms of effects, The Magicians is first-rate. An invading Beast is one of the most intriguingly designed monsters I’ve ever seen, and the spellcasting effects are quite original.

Although there’s a bit too much crammed into The Magicians’ premiere, it’s a fresh take on magic in the real world (mostly because it does, in fact, take place in the real world for the most part) and even the minor characters show all kinds of potential for further development.

So, while there’s room for improvement, what we already have is fresh and fun and well worth watching.