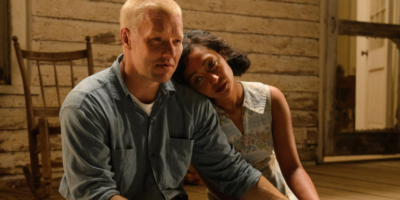 The Producers Guild of america has announced that it will award Loving – the story of interracial couple Richard and Mildred Loving’s fight to be together as a married couple in their hometown – the Stanley Kramer Award.

The Stanley Kramer Award is given to honor a production, producer or other individuals whose achievement or contribution illuminates and raises public awareness of important social issues.

The Stanley Kramer Award was established in 2002 to honor a production, producer or other individuals whose achievement or contribution illuminates and raises public awareness of important social issues.  Producer/director Stanley Kramer created some of the most powerful work in the history of American motion pictures, including such classics as INHERIT THE WIND, ON THE BEACH, THE DEFIANT ONES, and GUESS WHO’S COMING TO DINNER.

2017 marks the 50th anniversary of Loving vs. Virginia, the United States Supreme Court’s landmark civil rights decision invalidating laws prohibiting interracial marriage. LOVING celebrates the real-life courage and commitment of the interracial couple, Richard and Mildred Loving (portrayed in the film by Joel Edgerton and Ruth Negga), who married in 1958 and then spent the next nine years fighting for the right to live as a family in their hometown. The state of Virginia, where they made their home, sought to end their love story by first jailing and then banishing them. Together, they took their civil rights case all the way to the Supreme Court, which in 1967 reaffirmed the very foundation of the right to marry.

“It has never been more important than right now to recognize our shared humanity and the quietly unshakable bond between Richard and Mildred Loving, who-just like Stanley Kramer’s classic characters-stood as the ultimate rebuke to a culture intent on dividing us,” stated Producers Guild Awards Chairs Donald De Line and Amy Pascal. “LOVING is a film that’s unthinkable without the path that Stanley Kramer blazed, and one the great filmmaker would be proud to recognize as part of his legacy.”

Additionally, 2017 marks the 50th anniversary of the theatrical release of GUESS WHO’S COMING TO DINNER, produced and directed by the PGA honor’s namesake, Stanley Kramer. Similar to LOVING, the critically acclaimed box office hit was an empathetic portrayal of the then-controversial issue of interracial marriage. The groundbreaking film starred Spencer Tracy, Sidney Poitier, and Katharine Hepburn, and was released six months after the Supreme Court’s milestone ruling.

“Stanley had a vision for social justice,” said the late filmmaker’s widow, Karen Kramer. “He was committed to telling stories to create change.  His movies changed the culture, and sometimes even helped change the laws.”

The Stanley Kramer Award is determined by a seven-person committee appointed by the PGA’s Board of Directors, and operates independently of the Producers Guild Awards committee and the PGA staff. Previous recipients of the Stanley Kramer Award include: AN INCONVENIENT TRUTH, HOTEL RWANDA, IN AMERICA, ANTWONE FISHER, PRECIOUS, IN THE LAND OF BLOOD AND HONEY, BULLY, FRUITVALE STATION, THE NORMAL HEART, and the 2016 honoree, THE HUNTING GROUND.

ABOUT THE PRODUCERS GUILD OF AMERICA (PGA)

The Producers Guild of America is the non-profit trade group that represents, protects and promotes the interests of all members of the producing team in film, television and new media. The Producers Guild has more than 7,500 members who work together to protect and improve their careers, the industry and community by providing members with employment opportunities, seeking to expand health benefits, promoting fair and impartial standards for the awarding of producing credits, as well as other education and advocacy efforts such as encouraging sustainable production practices.  For more information and the latest updates, please visit Producers Guild of America websites and follow on social media: